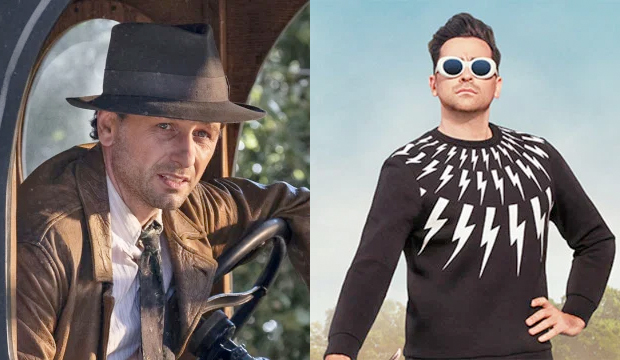 Of the 11 Golden Globe Awards handed out on the television side, four will go to male actors who made a splash in the 2020 calendar year. Per Gold Derby odds, two trophies will be given to performers who appear in brand new programs, a staple of the Hollywood Foreign Press: Matthew Rhys in drama series “Perry Mason” and Mark Ruffalo in limited series “I Know This Much Is True.” The other pair of trophies are forecasted for father-son duo Eugene Levy and Dan Levy, who will buck the “new show” trend and prevail on their sixth (and final) season of “Schitt’s Creek.” Do you agree or disagree with these Golden Globe predictions? You have until February 3 to make your own picks.

Best TV Drama Actor winner prediction: Matthew Rhys (“Perry Mason”)
Rhys is a two-time Globe nominee for “The Americans,” but he has yet to take home a trophy of his own. On HBO’s “Perry Mason” he takes on the role of the classic 1930s private investigator-turned-defense attorney who finds himself going up against the mob when a baby is found dead. The iconic character is based on Erle Stanley Gardner‘s novels and short stories, which were previously adapted into the popular TV series led by Raymond Burr (1957–1966). Predicted runner-up: Jason Bateman (“Ozark”).

Best TV Comedy Actor winner prediction: Eugene Levy (“Schitt’s Creek”)
Despite starring in film and television for many decades, Eugene Levy has never been nominated for a Golden Globe. Our odds-makers think that will finally change this year, particularly coming off of the “Schitt’s Creek” Emmy sweep in which he won for producing and starring in the Pop TV comedy series. Levy plays failed businessman Johnny Rose, who takes his family to the titular blue collar town after he loses all of their money. Predicted runner-up: Jason Sudeikis (“Ted Lasso”).

Best TV Movie/Limited Series Actor winner prediction: Mark Ruffalo (“I Know This Much Is True”)
Ruffalo is a three-time Globe contender for “Foxcatcher,” “The Normal Heart” and “Infinitely Polar Bear,” but we predict he’ll finally step up to the podium this year thanks to his dual roles on “I Know This Much Is True.” He portrays twin brothers Dominick Birdsey and Thomas Birdsey on HBO’s dark limited series in which he seeks to expose long-forgotten family secrets. Ruffalo took home the Emmy last year for this project, so will the Golden Globes follow suit? Predicted runner-up: Ethan Hawke (“The Good Lord Bird”)

Best TV Supporting Actor winner prediction: Dan Levy (“Schitt’s Creek”)
Dan Levy, the son of Eugene, is looking for his first Globe after winning four — yes, four — Emmys in September for producing, writing, directing and starring in “Schitt’s Creek.” Throughout the show’s six-year-run, Levy endeared himself to audiences as his character, spoiled son David Rose, slowly grew empathy for those around him. The series finale ended on a high note as it focused on David’s emotional marriage to Patrick (Noah Reid), but were Golden Globe voters watching? Predicted runner-up: Brendan Gleeson (“The Comey Rule”).