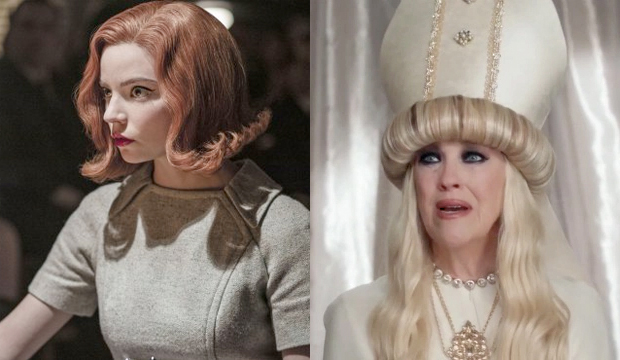 When making your predictions for the 2021 Golden Globe TV winners, it’s always smart to air on the side of caution and go with the newest, shiniest contenders. After all, the Hollywood Foreign Press Association is notorious for voting for the most recent things they watched, which gives a huge advantage to shows that aired at the end of the calendar year. Per Gold Derby odds, two of the four Golden Globes handed out to female actors will unsurprisingly go to those in new roles: Anya Taylor-Joy (“The Queen’s Gambit”) and Gillian Anderson (“The Crown”). The other two actresses are predicted to prevail after starring on their shows for two years and six years, respectively: Olivia Colman (“The Crown”) and Catherine O’Hara (“Schitt’s Creek”).

Best TV Drama Actress winner prediction: Olivia Colman (“The Crown”)
Colman won this prize last year in a bit of a surprise, as many pundits thought Jennifer Aniston (“The Morning Show”) would claim victory. That marked Colman’s third Golden Globe win on her third nomination — that’s right, she’s never lost. Her prior victories were for “The Night Manager” and “The Favourite.” Colman’s triumph for “The Crown” came three years after Claire Foy won for playing the same role in the first season, proving the HFPA voters can’t get enough of Queen Elizabeth II. Predicted runner-up: Laura Linney (“Ozark”).

Best TV Comedy Actress winner prediction: Catherine O’Hara (“Schitt’s Creek”)
Shockingly, O’Hara has never been nominated for a Golden Globe for her decades of work in the industry. That should likely change this year. O’Hara is the odds-on leader in this category after winning the Emmy last year as part of a record-making “Schitt’s” sweep. The only problem is that Golden Globes voters don’t seem to like “Schitt’s Creek” — or perhaps they’ve never seen it? The Canadian laffer has yet to receive a single nomination, and now this is its final chance as the show has walked off into the sunset. Predicted runner-up: Elle Fanning (“The Great”).

Best TV Movie/Limited Series Actress winner prediction: Anya Taylor-Joy (“The Queen’s Gambit”)
This Netflix program debuted at just the right time, as its water cooler buzz dominated the end of 2020. Taylor-Joy stars as a chess prodigy who deals with addiction problems. Over the course of the seven episodes, we see her character Beth Harmon age from a child to an adult, so Globe voters will really feel as though they know her by the time all is said and done. Taylor-Joy gets extra credit points as she also appears in the film “Emma,” which is getting Oscar buzz. Predicted runner-up: Shira Haas (“Unorthodox”).

Best TV Supporting Actress winner prediction: Gillian Anderson (“The Crown”)
We know the Golden Globes already love Anderson, as she won once before for “The X-Files” in the late-1990s. Anderson made her grand debut on “The Crown” during Season 4, which streamed last November on Netflix. She takes on the role of UK Prime Minister Margaret Thatcher, an adversarial character to Colman’s Queen who drives much of the political drama in the 10 new episodes. Of note, Anderson received unanimous reviews for her performance from TV critics. Predicted runner-up: Uzo Aduba (“Mrs. America”).