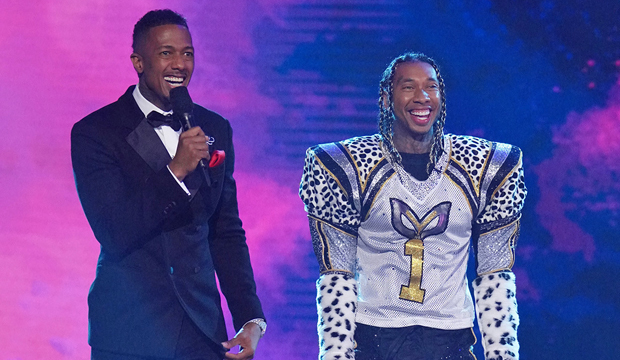 After sitting out last week, Group B made their debut on Wednesday night’s episode of “The Masked Singer.” The collection of disguised celebrities sang their hearts out, but it was Dalmatian that couldn’t hold his own and was forced to unmask following a performance of “Beautiful” by Snoop Dogg & Pharrell Williams. The spotted pup was revealed to be none other than hip-hop star Tyga.

“I saw Wayne do it,” Tyga told host Nick Cannon during his unmasked interview. Rapper Lil Wayne was the first performer eliminated from Season 3 after performing “Are You Gonna Go My Way” as Robot. “That just inspired me,” Tyga admitted. After the “Rack City” hitmaker pulled off his dog mask, panelist Robin Thicke remarked, “We’re lucky to have you on the show. Every time we have the young, hottest cats on the show it makes us look cooler.”

Even though Robin collaborated with Tyga on the song “This is Like,” he had no clue his friend was behind the mask. Robin guessed another rapper, Nelly, was the Dalmatian. Nicole Scherzinger jumped on Robin’s bandwagon, guessing Nelly as well. Meanwhile, Jenny McCarthy first said it was TV host Steve Harvey before changing her pick to comedian Kevin Hart. Ken Jeong thought the rapping canine was former NFL star Reggie Bush.

Tyga was the first performer eliminated from Group B. His exit was preceded by Group A singers Dwight Howard as Octopus, Vivica A. Fox as Mother Nature and Toni Braxton as Pufferfish. The contestants advancing from Group B are Banana Split, Cupcake, Mallard and Queen of Hearts. “The Masked Singer” will continue on Wednesday, October 6 with brand new wildcards joining Group B.