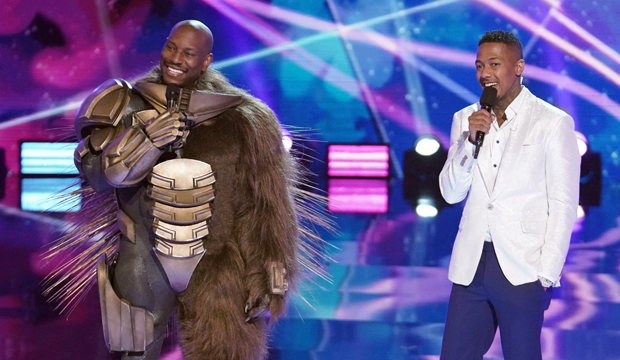 The Spicy 6 hit the stage on Wednesday night’s episode of “The Masked Singer,” belting it out in hopes of getting one step closer to the Golden Mask trophy. Following more in-depth interviews and entertaining performances, it was the Robopine who came up short and had to unmask in front of America. The futuristic rodent turned out to be none other than Grammy nominated singer-songwriter Tyrese Gibson.

“When you have two daughters you look for those moments to sit in front of the TV and do something fun as a family,” the “Fast and Furious” franchise star told host Nick Cannon during his unmasked interview. “So here I am now with a Robopine outfit on.” Despite coming in sixth place, the “Sweet Lady” singer enjoyed his run on the series. Tyrese also confessed why he lied about being a middle-aged man with grandkids. “Everything about my backstory that I had to create was because I know all of y’all personally,” he admitted. “I was completely in character.”

Nicole Scherzinger was the only permanent panelist to correctly guess Tyrese was serenading them with “Water Runs Dry” from behind the Robopine mask, but guest panelist Chrissy Metz recognized his voice as well. Jenny McCarthy couldn’t resist guessing Jamie Foxx yet again while Robin Thicke picked “Empire” star Terrence Howard and Ken Jeong was certain the Robopine had to be Wesley Snipes. None of them were correct with their first impression guesses so no points towards the Golden Ear trophy were scored. Jenny, Ken and Nicole all guessed Foxx and Robin initially thought the Robopine was Tyrese’s TGT groupmate Ginuwine.

Nicole may have been the only panelist to figure out Tyrese was behind the mask, but plenty of hints throughout Robopine’s clue packages pointed towards the R&B crooner. The light bulb in Robopine’s mind reader was a clue to Tyrese’s hometown of Watts and his album “2000 Watts.” The pacifier and baby toys were clues to Tyrese’s movie, “Baby Boy.” There were also multiple clues focused on the “Fast and Furious” films and his dearly departed co-star, Paul Walker.

Only five performers remain in contention for the Season 5 Golden Mask trophy: Black Swan, Chameleon, Piglet, Russian Dolls and Yeti. Eight singers were unmasked prior to Tyrese as the Robopine: Kermit the Frog as the Snail, Caitlyn Jenner as the Phoenix, Danny Trejo as the Raccoon, Logan Paul as Grandpa Monster, Nick Cannon as the Bulldog, Mark McGrath as the Orca, Bobby Brown as the Crab and Tamera Mowry-Housely as the Seashell.