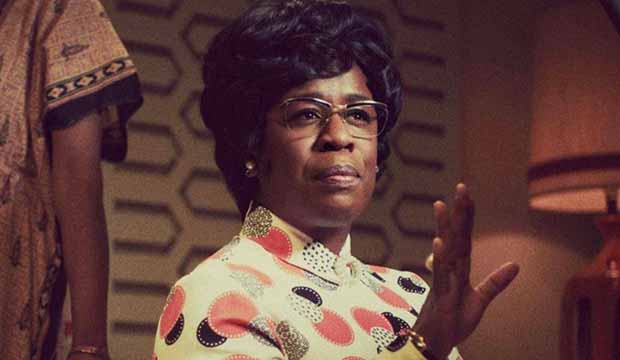 Uzo Aduba is on a hot streak for her portrayal of historic political figure Shirley Chisholm in the FX limited series “Mrs. America.” She won the Emmy for Best Supporting Actress in a Movie/Limited Series last fall and was recently nominated in the same category by the Critics’ Choice TV Awards. Now the the three-time Emmy champ and five-time SAG winner is within striking distance of her first Golden Globe.

According to our TV predictions, Aduba is currently ranked second in the catch-all supporting category with 11/2 odds, trailing Gillian Anderson as Margaret Thatcher in “The Crown” (82/25 odds). Rounding out the top five TV Supporting Actress contenders are Annie Murphy in “Schitt’s Creek”(6/1 odds), Helena Bonham Carter in “The Crown” (15/2 odds) and Julia Garner in “Ozark” (17/2 odds).

Should Aduba prevail, she would become just the second Black actress to take home a Globe in this category and the third woman of color. Gail Fisher won for playing Peggy Fair in the CBS detective series “Mannix” in 1970. It was actually the first year the Globes handed out an award in this category and it would be the last time a person of color held it until Sandra Oh won for playing Dr. Cristina Yang in “Grey’s Anatomy” in 2005.

SEEUzo Aduba (‘Mrs. America’) is the 3rd performer to win Emmys across the 3 genres

Despite never winning, Aduba has received two Golden Globe nominations previously. At the 2015 ceremony she was nominated for “Orange is the New Black,” but lost Best TV Supporting Actress to Joanne Froggatt in “Downton Abbey.” The following year she was nominated in the same category, losing to Maura Tierney in “The Affair.” The supporting categories are always a bit more competitive at the Globes, however, lumping together actors from comedies, dramas, limited series and TV movies.  Last year Globe voters picked Patricia Arquette in “The Act” as their favorite supporting actress of 2019, with Carter (“The Crown”), Toni Collette (“Unbelievable”), Meryl Streep (“Big Little Lies”) and Emily Watson (“Chernobyl”) as the other four nominees.

Aduba made history with her latest Emmy win for “Mrs. America,” becoming just the third performer to win Emmys across three genres. Her first win for “Orange is the New Black” was for Best Comedy Guest Actress. The following year, after the series was moved to Drama, Aduba took home her second win as “Crazy Eyes” in the Best Drama Supporting Actress category. Her win for “Mrs. America” was in the limited series category, giving her statuettes from three separate genres, something only Ed Asner and Cloris Leachman had done before her. Will she follow in their footsteps once again by becoming a Golden Globe winner?