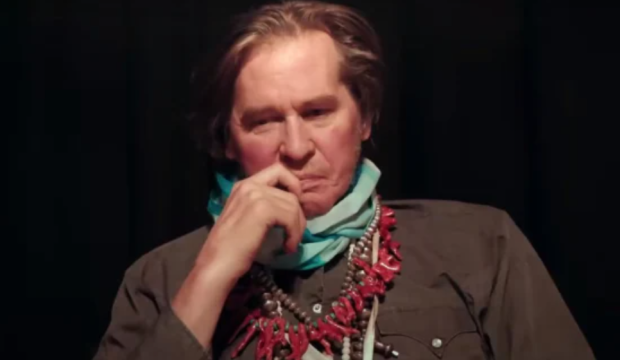 “Val,” the warmly received and revealing documentary about actor Val Kilmer, began simply with an email. A decade ago, Leo Scott was working as an editor on director Harmony Korine’s half-hour comedy series for VICE Films ‘The Lotus Community Workshop.” Kilmer played a version of himself as a motivational speaker. “It was quite incredible what he did with that character,” said Scott during a recent Film Independent Zoom conversation on “Val.”

“I really, really wanted to tell him how good he was,” Scott noted. So, he sent a carefully crafted e-mail to the actor, who has starred in such films as 1984’s “Top Secret!,” 1996’s “Top Gun,” 1991’s “The Doors,” 1993’s “Tombstone” and 1995’s “Batman Forever.” Much to Scott’s surprise, Kilmer quickly sent him back an email. Soon, Scott found himself working with Kilmer on his one-man theater piece on Mark Twain.

“He was starting to workshop the thing and sharing it with small audiences for the first time. He was shooting these small performances and then he would send me footage in London where I was living. I would cut these plays together and then send them back to him.” After Scott moved to L.A., he became more involved with Kilmer and Twain, even filming the actor’s process in creating the show. But the Twain projected ended in 2014 when Kilmer was diagnosed with throat cancer, A tracheotomy allows Kilmer to talk but what the L.A. Times Robert Ebele described as a “monotonal growl.”

But the cancer didn’t end Scot’s working relationship with Kilmer. He began to help Kilmer digitize not only the tapes of the Twain show, but all the tapes, films and videos the actor had shot since he was a youngster growing up in Chatsworth. Those personal films are the heart and soul of “Val,” which premiered to strong acclaim at the Cannes Film Festival; health issues kept Kilmer from attending the screening. A celluloid scrapbook, “Val,” which was edited and directed by Scott and Ting Poo, offers a fascinating warts-and-all examination of his career and his personal life.

“I worked on a lot of documentaries with a lot of personal archives before,” said Poo. “But I’d never seen anything like what was going in and not just the amount of stuff he had accumulated over his life, but the incredible special nature of it in terms of just being in these intimate situations, behind-the-scenes on all these iconic films and everything from him practicing his craft and getting into character and just like the incredible special and intimate things with him and his family.”

After Kilmer recovered from cancer and was writing his autobiography, Scott and Poo approached him about doing a film about his life. “He was luckily into it,” said Poo. And no subject was off-limits. Over the decades, Kilmer had built a reputation for being a difficult actor especially during the tense shooting of the ill-fated 1996 “The Island of Dr. Moreau” with Marlon Brando. Kilmer was blamed for a lot of the problems. But there are two sides to every story and the footage Kilmer shot on the set illustrates he wasn’t the villain of the piece.

“We knew that reputation is a big part of his mythology as an actor,” said Poo. “But what we tried to do was show the context of him, his mindset and his emotions might have been in these situations. We didn’t want to editorialize in one way or another except to just let you experience these moments through the lens that he captured and then decide for yourself what the situation was about. I think offering more context of who he is and what drives him as an artist and very passionately as an actor helps give context around that type of thing.”

“Val” just isn’t vintage footage. Kilmer’s own chronicle is blended with contemporary scenes shot by the filmmakers. His son, actor Jack Kilmer, narrates the film and daughter Mercedes Kilmer is also featured in these sequences. And despite his health issues, Kilmer is an upbeat charmer. “At six decades, having been through the health wringer, he may not look or sound the same, but the twinkle-eyed self-possession and sense of humor evident from his vast selfie archive is still there in the filmmakers’ verité present,” noted Abele in his L.A. Times review.

Zoom host Dave Karger, who appears on TCM, asked the filmmakers about Kilmer’s response to “Val.” “Val himself has been largely absent from a lot of the big events surrounding the movie,” said Karger. “I don’t know if that’s something he just wasn’t ready to do or wasn’t able to do because of health issues. But has he been able to feel the love that this film has really engendered towards him?” “I believe he’s had a lot of people, friends, colleagues and just fans in general, reach out on one platform or another or just personally to tell him how much this film has meant to them and were touched by it,” said Poo. “We all have.”