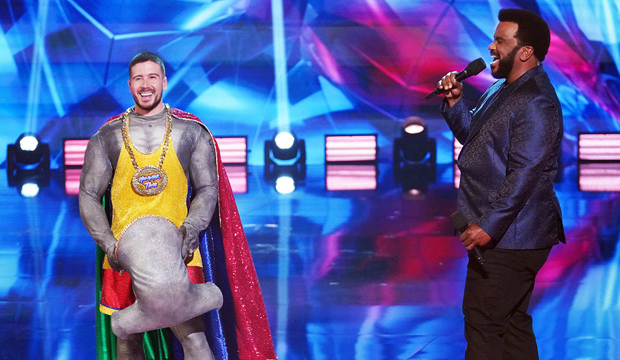 The panelists on “The Masked Dancer” were skunked once again on Wednesday’s episode when they all failed to guess “Jersey Shore” star Vinny Guadagnino was twirling around in the Hammerhead costume. Nobody was more upset than Paula Abdul, who named Vinny earlier in the episode but changed her mind at the last minute and guessed YouTube star David Dobrik was the light-footed shark. “I hate me,” she joked before telling the Keto Guido, “I love you though!” The Hammerhead was eliminated in the Super Six, failing to advance to the next round after his “Don’t Let Me Be Misunderstood” Paso Doble.

“These aren’t my real muscles by the way,” Vinny admitted during his unmasked interview with host Craig Robinson. But how was his experience in the competition? “It was great,” he said with certainty. “I’m not a professional dancer, you guys nailed it! But I like to learn new things. I had so much fun. This was the most fun thing I’ve ever done. The Hammerhead is not who I am in real life at all, so I love the anonymity of it. I got to go crazy and surprise everybody!”

The panel may have been wrong across the board, but they came oh, so close! Ken Jeong and guest panelist Whitney Cummings thought it was Vinny’s bestie, DJ Pauly D. Brian Austin Green thought the muscled up fish was another castmate from the shore, Mike “The Situation” Sorrentino. Ashley Tisdale was further off the mark, naming comedian Kevin Hart and Paula went with YouTuber David Dobrik.

Vinny revealed that the Las Vegas sign in his clue packages was a reference to his occasional residency as a stripper in the Chippendales. The eye chart in Hammerhead’s package was a clue to his former clothing brand I Have a Vision. The burger was a hint to Vinny’s starring role in MTV’s “The Hard Times of R.J. Berger.” And when Vinny took his shirt off in his first performance it was a nod to his residency at Chippendales.

Vinny was the fifth dancer to be unmasked this season, preceded by Ice-T as the Disco Ball, Bill Nye as the Ice Cube, Elizabeth Smart as the Moth and Brian McKnight as the Cricket. The five remaining two-steppers still in contention for the Diamond Mask trophy are Cotton Candy, Exotic Bird, Sloth, Tulip and Zebra. Did you guess Vinny G was dancing behind the Hammerhead mask?