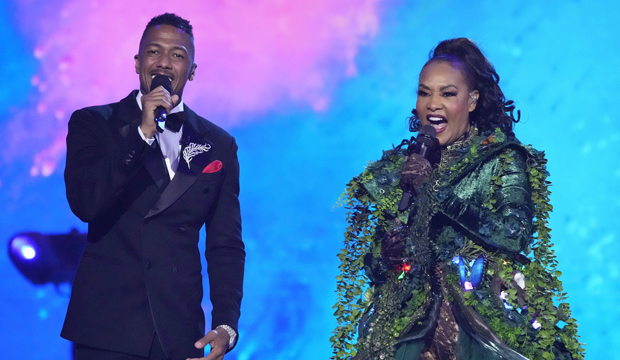 The epic two-night premiere of “The Masked Singer” concluded on Thursday night with Mother Nature’s elimination at the top of the hour-long telecast. The moss-covered creature’s performance of “I’m Coming Out” by Diana Ross was not enough to keep her in the Fox reality TV competition and she was forced to unmask in front of America, revealing herself as movie star Vivica A. Fox.

“This has been exhilarating,” Fox told host Nick Cannon during her unmasked interview. “I challenged myself. You know I’ve done so many things in my career. I’ve never done anything like this before and I had fun! I want to say to the panel, you guys are all amazing. Keep making dreams come true and having a great time doing it!”

Fox stumped the entire panel consisting of Robin Thicke, Jenny McCarthy, Ken Jeong and Nicole Scherzinger. Nobody seemed more upset than Jenny, who slammed her papers down on the desk, exclaiming, “I had that written down on my sheet!” Both Jenny and Ken thought Mother Nature was comedian Tiffany Haddish, while Robin and Nicole each guessed “Black-ish” star Tracee Ellis Ross.

Despite the panel’s failure guess Fox was Mother Nature, there were plenty of clues pointing them in her direction. The sparkler in Mother Nature’s package was a nod to Fox’s breakout role in “Independence Day.” The photo of Wayne Brady, also known as the Fox from Season 2, was a clue to Vivica’s last name. The penny in her package was a clue to Fox’s role as Copperhead in the film “Kill Bill.”

Fox was the second singer eliminated from Group A. Her exit was preceded by eight-time NBA all-star Dwight Howard as the Octopus. Later in Thursday’s episode the remaining Group A contestants (Bull, Pufferfish and Skunk) were joined by two new wildcard competitors (Baby and Hamster) before belting it out in hopes of advancing to the next round.