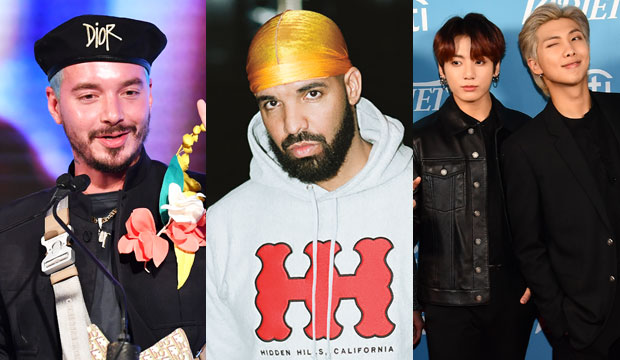 The 2021 VMA nominations are out, and there are a lot of records that could be broken at the 37th edition of these awards. From potential firsts for Cardi B, J Balvin and Drake, to historic repeats by BTS and The Weeknd, let’s see what milestones could be achieved this year.

Nominated for Best Pop, BTS’ “Butter” could make them only the third act to win the category back-to-back. The only other artists who have done so are NSYNC in 2000 (“Bye Bye Bye”) and 2001 (“Pop”), and Britney Spears in 2008 (“Piece of Me”) and 2009 (“Womanizer”). Additionally, “Butter” would tie BTS with No Doubt and Ariana Grande at two total wins, and they’d be one step closer to matching the biggest category winners: Britney Spears and Justin Timberlake, who have won three total (for Timberlake, twice with NSYNC and once solo).

Another record BTS can tie is in the Best K-Pop category. The boy band has won the award twice, and a third win would make them the third act to win any genre category three times in a row. The only others who have done this are Nirvana for Best Alternative (1992-1994) and J Balvin for Best Latin (2018-2020). And speaking of which …

SEE2021 VMAs predictions: Video of the Year is a race between Lil Nas X (‘Montero’) and Cardi B (‘WAP’), our early odds say

The Latin singer and rapper is nominated once again for Best Latin for his work on “Un Día (One Day)” alongside Dua Lipa, Bad Bunny, and Tainy. If Balvin wins, he’ll become the first artist to win a genre category four times consecutively. He’s previously won for his videos for “Mi Gente” (with Willy William) in 2018, “Con Altura” (with Rosalía and El Guincho) in 2019, and last year for “Qué Pena” (with Maluma).

Balvin would also become the most awarded Latin artist at the awards. He’s currently tied with Ricky Martin for the title, with five wins each.

Last year’s Video of the Year winner The Weeknd could join Beyoncé, Rihanna, Eminem, and Taylor Swift as the only artists to win the prestigious award more than once as a lead artist. He won for “Blinding Lights” in 2020, and if “Save Your Tears” wins in 2021, he would also be the first to win the category twice in a row. Eminem has the shortest gap between Video of the Year wins to date, with Eminem winning in 2000 for “The Real Slim Shady” and again in 2002 for “Without Me.”

Cardi B and Megan Thee Stallion

There’s a couple historic achievements this pair of female rappers could accomplish with their smash hit “WAP.” If they win Video of the Year, it’ll be the second female collaboration to prevail following “Lady Marmalade” by Pink, Mya, Lil Kim, and Christina Aguilera, but it’ll also be the first time the award is won by a female rapper since Missy Elliott’s “Work It” back in 2003. Furthermore, if “WAP” wins Best Hip Hop, it’ll be the fourth consecutive female video to win the category. And on top of that, a win for “WAP” would tie Megan and Cardi for the second most wins in the category with Missy Elliot, OutKast, and Eminem; Nicki Minaj and Drake hold the record for most wins with three each.