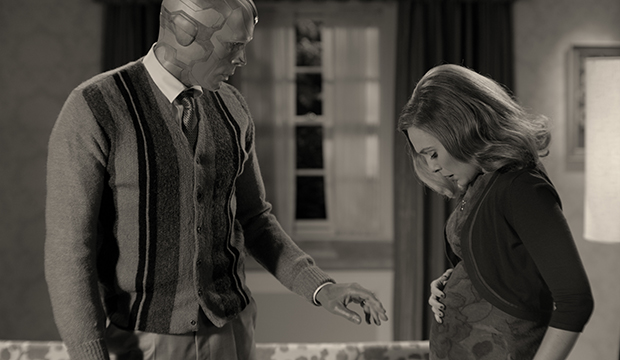 If I were Marvel’s Kevin Feige, I would have launched “WandaVision” with the first three episodes rather than just the two we saw last week, because this week’s ’70s-themed episode, which saw Wanda (Elizabeth Olsen) give birth to twins Billy and Tommy less than 24 hours after becoming pregnant, peeled back the facade of a perfect suburban existence to hint at something larger and more serious going on. But before I get into all that, let’s talk about the twins and what this might mean.

Who are Wanda and Vision’s twins, Billy and Tommy?

In the comics, Billy and Tommy were born in “The Vision and the Scarlet Witch” (Vol. 2, No. 12), but because Vision (Paul Bettany) is, you know, not actually human and therefore cannot have children, the boys were magical constructs created by Wanda that had souls formed from a part of the demon Mephisto (don’t ask). Unfortunately, the twins are later wiped out of existence after that energy is reabsorbed by Mephisto. (A potentially interesting fact: in another comics storyline, the death of Wanda’s children plays a role in her mental breakdown and the eventual House of M storyline that so many fans have theorized will play a huge role this season. Just saying. This might be of interest!)

It’s worth noting that Billy and Tommy are eventually reincarnated in new bodies in the comics and eventually become known as Wiccan and Speed, respectively. Billy’s powers are similar to those of Wanda, aka Scarlet Witch, while Speed has powers much like Wanda’s twin brother Pietro, aka Quicksilver. In the Marvel Cinematic Universe, Pietro (Aaron Taylor-Johnson) was killed by Ultron in “Avengers: Age of Ultron” (2015), which brings us back to this week’s episode of “WandaVision.”

SEE ‘WandaVision’: Here’s what that mysterious symbol means — and how it ties into the House of M

Who is Geraldine? And is she working for S.W.O.R.D.?

Shortly after the twins’ birth, Wanda reveals to her friend Geraldine, whom audiences know to actually be Monica Rambeau (Teyonah Parris), that she is also a twin. It’s at this point that Geraldine either breaks through whatever mind control she’s been under or seems to forget she’s supposed to be playing a part, because she asks Wanda straight out about Pietro being killed by Ultron, effectively shattering the facade of a happy suburban family. Warning bells start going off in Wanda’s head and she asks who Geraldine really is. She also realizes Geraldine is wearing a necklace that resembles the S.W.O.R.D. logo that’s been popping up all over the series.

While this is going on inside, Vision is having a conversation with Agnes (Kathryn Hahn) and Herb (David Payton) outside. They reveal Geraldine has no home in Westview and that there’s something strange going on. “[Geraldine] came here because we’re all…,” Herb nervously begins to explain to Vision. However, before he can spill the beans, Agnes shushes him and takes off on her bicycle to end the conversation. By the time Vision returns, Geraldine is gone and Wanda seems to be at peace once more.

But in the episode’s closing moments, which are no longer in the 4:3 aspect ratio of the rest of the episode — a creative way of revealing we’re back in the real world — we see that Geraldine has been kicked out of Westview, and the red energy surrounding her as she falls to the ground is a dead giveaway that Wanda was the one behind her expulsion (the show made sure to remind you of this earlier in the episode when she attempted to get rid of the stork). Geraldine is then immediately surrounded by armed personnel, but we don’t know yet who they are or if they’re working with Geraldine. What we do know is that there are barricades blocking off the road into “Westview” and there appears to be some sort of projected simulation going on, just based on the way the air shimmered when Geraldine appeared.

SEE ‘WandaVision’: 7 things to know before you watch the Marvel series

So, is Wanda behind it all?

It seems obvious that Wanda is in command of the town of Westview, or at least has the ability to alter events within the town. She rewound time again this week, albeit less obviously, after Vision started to realize that something odd was going on. Her contractions later caused her to be unable to control her powers, which led to a number of problems throughout the town. And then she also banished Geraldine completely from whatever Westview actually is. Additionally, based on Vision’s conversation with Herb, it seems that the rest of the townspeople are trapped within Westview and are forced to play their part in whatever is going on.

This episode is the first time we’ve seen the outside world, or anything without either Wanda or Vision present, and while we still have more questions than answers, “WandaVision” is starting to look and feel more like a Marvel project than merely an ode to classic sitcoms. So everyone who complained or was confused last week should feel pretty good about where the show is headed. Hopefully we’ll learn more about S.W.O.R.D. and the world outside next week.

New episodes of “WandaVision” are released weekly on Fridays on Disney+.