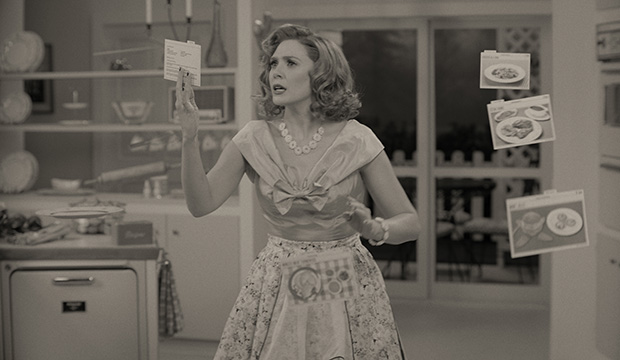 After going more than a year without a major Marvel project to satiate our collective need for superhero content, “WandaVision” put all of us out of our misery when it premiered Friday with two half-hour episodes on Disney+. Part classic sitcom, part blockbuster, the nine-episode series starring Elizabeth Olsen and Paul Bettany as their Marvel characters Wanda Maximoff and Vision, respectively, is bold, refreshing, and draws inspiration from such iconic TV shows as “The Dick Van Dyke Show,” “Bewitched” and “The Brady Bunch.”

The first two episodes of the series, which mark the official beginning of Phase 4 of the Marvel Cinematic Universe after “Black Widow” was delayed until May, depict Wanda, aka Scarlet Witch, and Vision living a quiet married life in the idyllic suburban town of Westview. They spend their days throwing dinner parties for Vision’s boss (Fred Melamed) and his wife (Debra Jo Rupp) and participating in town talent shows (for the children!), all the while attempting to cover up their abilities and keep their new neighbors from discovering their secret.

SEE ‘WandaVision’: 7 things to know before you watch the Marvel series

It’s a bit unclear how any of this is even possible, though, as Vision, an android with a synthetic body who was brought to life by the Mind Stone in “Avengers: Age of Ultron” (2015), died at the end of “Avengers: Infinity War” (2018) in the battle against Thanos (Josh Brolin). For the most part, Wanda and Vision fail to realize that anything about their wedded bliss is amiss. That is until their newfound acquaintances and neighbors, including Kathryn Hahn’s Agnes, start asking simple questions about their past they cannot answer: where did they move from? How long have they been married? No one knows.

These brief moments of confusion pass as quickly as they come, and it seems as if everything is forgotten until, in the second episode, Wanda discovers a toy helicopter in her rose bushes. The helicopter is in vivid color, unlike the rest of the show’s world, which is not only in black and white in the first two episodes but is also delivered in the old 4:3 aspect ratio. This tells us  this object isn’t part of the illusion, and eagle-eyed viewers will notice the helicopter features a symbol that includes a sword (this symbol can also be glimpsed at the end of the first episode; it’s on a computer screen and on a notebook that is being used by the person watching the “WandaVision” show within the show). This symbol hints at the presence of the organization known as S.W.O.R.D.

In the comics, S.W.O.R.D. stands for Sentient World Observation and Response Department. It is tasked with monitoring potentially hostile worlds. However, it seems that the acronym stands for something else in the MCU; according to new official collectible cards released by Topps, S.W.O.R.D. stands for Sentient Weapon Observation Response Division. So, what does this mean for Wanda and Vision and what’s happening to them? Well, between this and the voice heard over the radio in the second episode that asks Wanda who is doing this to her, it’s clear that someone, somewhere is monitoring her. Is she the sentient weapon in question? It’s definitely possible! Which brings us to the House of M.

What is the House of M?

One of the many goals of “WandaVision,” in addition to fleshing out the emotional arcs of characters not named Tony Stark (Robert Downey Jr.) and Steve Rogers (Chris Evans), is to dig into Wanda as Scarlet Witch. The character is extraordinarily powerful in the comics, and the Marvel films have only begun to scrape the surface of what she can do, likely because the films needed Thanos to feel unstoppable. Many fans have theorized the series is adapting the “House of M” storyline from the comics, which occurred after Wanda suffered a mental breakdown following a great loss and altered reality until it was nearly unrecognizable.

Wanda is able to manipulate reality (we saw her do it in “Ultron,” when she was still working for HYDRA), and given that she was snapped out of existence immediately after Vision’s death in “Infinity War,” she has had no time to properly grieve. This idealized reality in which she is living a perfect life as a happy wife to Vision could be a specific fantasy that Wanda has created as a means of coping with her trauma. It would explain why Wanda rewinds reality at the end of the second episode after witnessing a man wearing a beekeeper’s uniform adorned with the S.W.O.R.D. symbol rising from a manhole cover in the street. It’s as if she believes his presence threatens the carefully constructed world she has been living in. In that regard, this is not just a potentially dangerous situation created by an all-powerful woman, but it’s also fairly emotionally devastating as well.

Still, it remains to be seen if the series is, indeed, adapting “House of M” and potentially turning Wanda into a threat ahead of “Doctor Strange in the Multiverse of Madness,” in which Olsen will co-star opposite Benedict Cumberbatch. The trailers for the show also seemed to hint that Wanda was being imprisoned, and the commercial within the second episode pointed toward HYDRA as a possible culprit. So we probably shouldn’t count that out.

But it will be interesting to see how S.W.O.R.D. — and Teyonah Parris’ Monica Rambeau, last seen as a young girl in “Captain Marvel” (2019) and introduced here in the second episode as an adult named Geraldine — will play into this scenario. It’s likely only a matter of time before we start getting some answers. After all, there are only seven more episodes before we must turn our attention to the events of “The Falcon and the Winter Soldier” in March.

New episodes of “WandaVision” are released weekly on Disney+.