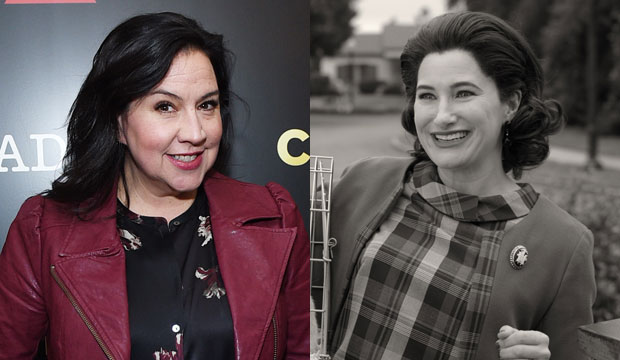 Composer Robert Lopez has made EGOT history in a number of ways, but his wife and musical collaborator Kristen Anderson-Lopez is closing in on him, and before long they could become the first husband-and-wife duo in history to win the showbiz grand slam. This year they share two nominations for their work on the Disney+ limited series “WandaVision,” and if they win one or both of them, Anderson-Lopez will cross the third prize off her list.

Robert Lopez completed his EGOT in 2014 with his Oscar win for the original song “Let it Go” from “Frozen.” That made him the youngest ever to achieve the feat (he was 39), the fastest to achieve it (10 years), and eventually he became the first to win all four of those coveted awards multiple times. Before he teamed creatively with his better half he won Tonys for composing “Avenue Q” (2004) and “The Book of Mormon” (2011), as well as another prize for co-writing the book of “Mormon.” He also won his first Grammy for the “Mormon” cast recording. And he claimed two Daytime Emmys in 2008 and 2010 for his music direction and composition for the animated series “Wonder Pets!”

The first prize he won with Anderson-Lopez was the Oscar for “Let it Go,” which she co-wrote. That completed his grand slam and began hers. The following year the pair shared two Grammys for “Let it Go” and the “Frozen” compilation soundtrack as a whole. So that was two down, two to go for Anderson-Lopez, which brings us to the Emmys. The Lopezes have been nominated for four Primetime Emmys since 2015. Two of those bids came this year, for the viral original song “Agatha All Along” from “WandaVision” and for the “WandaVision” main title theme music. And according to the combined predictions of Gold Derby users, they’re the front-runners to win both awards.

If they do win, Anderson-Lopez will only need a Tony to join her husband in the exclusive EGOT club, and that’s certainly within reach for her. She already earned a Tony nomination for the “Frozen” score when the show was staged on Broadway, and she picked up two Drama Desk nominations in 2011 for the book and score from the off-Broadway musical “In Transit,” which eventually graduated to the Great White Way in 2016. Broadway is on the cusp of reopening after COVID-19 devastated the theater industry, so whatever she might have in the works as her career progresses, she has until 2024 to surpass her husband as the fastest EGOT ever.

But she’s got to win one of these Emmys first. Do you agree with our consensus that she’ll do just that?