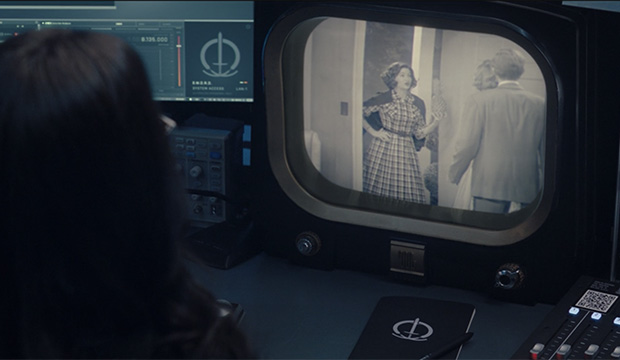 The fourth episode of “WandaVision,” aptly titled “We Interrupt This Program,” paused the show’s sitcom shenanigans to offer viewers a glimpse of what was transpiring outside of Westview and provide some much-needed answers to a few burning questions.

First, if you weren’t aware of all the references to the presence of S.W.O.R.D., which the show confirmed stands for Sentient Weapon Observation Response Division, you definitely are now. The episode picked up after the events of “Avengers: Endgame” (2019), with Monica Rambeau (Teyonah Parris) and everyone else who disappeared as a result of the Snap returning. It didn’t take long for viewers to learn that Monica’s mother, Maria “Photon” Rambeau (Lashana Lynch), from “Captain Marvel” (2019), had died while she was gone, or that Monica was a member of S.W.O.R.D., which in the comics was known as the Sentient World Observation and Response Department. She’s quickly dispatched on a missing persons case to Westview, New Jersey, where she meets up with Randall Park’s Agent Jimmy Woo from the “Ant-Man” films. That’s when things begin to get confusing (but also enlightening).

According to local law enforcement from Eastview, the town of Westview doesn’t exist, but Monica and Agent Woo feel its presence. However, when they attempt to send in a drone to scope the town out, it disappears behind the energy field first glimpsed at the end of episode 3. Soon after, Monica also disappears within the field. That’s when S.W.O.R.D. calls in anyone and everyone to figure out what’s happening, and Marvel fans are reunited with “Thor”’s Darcy Lewis (Kat Dennings), now armed with a PhD in astrophysics, who quickly discovers the “WandaVision” broadcast.

S.W.O.R.D. begins observing and recording the “WandaVision” episodes, with Darcy becoming invested in Wanda (Elizabeth Olsen) and Vision’s (Paul Bettany) story, and soon the team is able to identify the people in Westview as missing persons rather than people created by Wanda’s powers. Well, they’re able to identify nearly all of the people. Emma Caulfield Ford’s Dottie is missing from Woo’s big white board of information, and there’s one person on it who hasn’t yet been identified: Kathryn Hahn’s Agnes.

SEE ‘WandaVision’: What Wanda and Vision’s twins tell us about what’s actually going on

So, who is Agnes?

For months now, fans have speculated that Hahn’s nosey neighbor is actually the comic book character Agatha Harkness, who was a talented witch and mentor to Wanda. It’s easy to see how they might suspect that, given the similarity of the names and the fact that at one point in the trailers Agnes is actually dressed as a witch for Halloween. It’s exactly like Marvel to do something as obvious as that. But another key factor that points to Agnes being Agatha is the fact that, based on what we’ve seen in the trailers, she is one of the few residents of Westview who is aware of what’s happening (and that Vision is supposed to be dead).

Episode 4 confirms the energy barrier has a strange effect on the people and objects that exist within its boundaries. The drone that Monica and Agent Woo send in becomes period appropriate as a toy helicopter, though it retains its color. Meanwhile, the S.W.O.R.D. agent sent into town through the sewers to find Monica becomes a beekeeper once he passes the barrier underground (and his tether becomes an old jump rope — nice touch, writers!), and Monica loses her memory and subsequently plays the role of Geraldine, at least until Wanda mentions Pietro (Aaron Taylor-Johnson) and Monica’s memories are unlocked (more on that in a minute).

We still don’t know how Agatha would play into this though. She seems to be as trapped as everyone else in town. So how did she end up in Westview?

SEE ‘WandaVision’: Here’s what that mysterious symbol means — and how it ties into the House of M

Wanda is behind everything happening in “WandaVision”

In addition to providing answers and giving the show some real world context (well, real world for the Marvel Cinematic Universe), the episode seemingly confirms that Wanda is in control of everything that occurs in Westview, which many had assumed given the way she was able to rewind time in previous episodes. First and foremost, we see the confrontation between Wanda and Monica that we missed last week. After Monica brings up Ultron, she tries to backtrack and say that she’s just Wanda’s friendly neighbor, but Wanda knows better. “You’re not my neighbor and you’re definitely not my friend,” she tells Monica while beginning to call upon her powers. “You are a stranger and an outsider, and right now you are trespassing here, and I want you to leave.”

In the moments after this altercation, the sitcom facade is dropped completely and Wanda can see Vision as he really is, which is dead. His saturated coloring is gone, as is the Mind Stone that is supposed to be in his forehead giving him life. He’s the Vision of the end of “Avengers: Infinity War” (2018), after the stone was ripped from his forehead. But none of this — not the confrontation, not dead Vision, not Monica flying through several homes in a row like a good old fashioned cartoon — is in the broadcast that Darcy and S.W.O.R.D. are monitoring from the outside.

Is Wanda censoring the broadcast?

There have been hints throughout the series that something is amiss in the broadcast of the show within the show: Wanda rewound time after seeing the S.W.O.R.D. agent/beekeeper in episode 2; there was a cut to signify something similar happened in episode 3 after Vision noticed something was off about their life in Westview; and now Agent Woo’s attempt to reach Wanda during her conversation with Dottie in episode 2, and the altercation between Monica and Wanda in episode 3 are both missing. Darcy realizes someone is censoring the broadcast.

But is it Wanda? She might be able to control everything that’s happening in Westview, but that doesn’t necessarily mean she’s the creator of this prison or the person responsible for it. Is it Dottie? Why isn’t she one of the people on S.W.O.R.D.’s white board? Given the references to HYDRA in the commercials within the series, it seems possible that something sinister is at play here. At the very least, it’s possible that Wanda’s HYDRA past — she and Pietro both received their powers through HYDRA experiments — has come calling.

New episodes of “WandaVision” are released weekly on Fridays on Disney+.