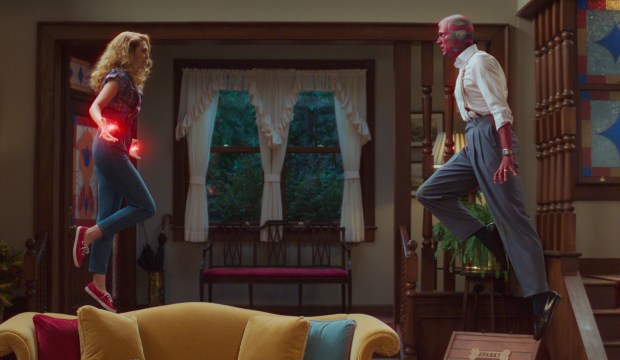 In the final moments of this week’s ‘80s-themed “WandaVision,” aptly titled “On a Very Special Episode…,” the Disney+ series continued to bend and twist reality, but it did so in much more dramatic fashion than we’ve come to expect.

After Vision (Paul Bettany) realizes that something is very wrong in Westview, and that Wanda (Elizabeth Olsen) is the person behind it all, something shocking happens: Wanda’s twin brother, Pietro, who died in “Avengers: Age of Ultron” (2015), arrives unexpectedly and seemingly without Wanda’s inference. However, he’s not portrayed by the MCU’s Aaron Taylor-Johnson like he was in “Ultron.” This version of Quicksilver is played by Evan Peters, who portrayed the character in “X-Men: Days of Future Past” (2014) and “X-Men: Apocalypse” (2016). This causes Darcy (Kat Dennings) to quip that the show “recast Pietro.” It could just be a fun nod to ‘80s sitcoms, but it’s almost certainly more than that.

Ever since Disney purchased 20th Century Fox in 2019, it was pretty much a given that former Fox-controlled properties the X-Men and the Fantastic Four would make their way to the Marvel Cinematic Universe. Kevin Feige has already announced an upcoming film for the latter comic book franchise, but the fate of the X-Men has been up in the air. And while this is all just theory at this point, it seems that the plan is to merge the existing X-Men universe with the MCU via the multiverse.

The MCU hinted at the existence of the multiverse in “Spider-Man: Far From Home” (2019) when Peter Parker (Tom Holland) geeked out upon meeting Mysterio, aka Quentin Beck (Jake Gyllenhaal), who was supposedly a warrior from another dimension. Beck turned out to be a big fat liar who lies, but the seeds for the multiverse were planted. So, what does this have to do with Pietro and his appearance on “WandaVision?” Well, we know the show leads directly into the Doctor Strange sequel “Doctor Strange in the Multiverse of Madness” (2022) and that Olsen stars in the film alongside Benedict Cumberbatch. We also know “WandaVision” will play into the third as-yet-untitled Spider-Man film debuting later this year and which could feature pretty much everyone who has ever appeared in a Marvel movie of some sort if all the casting rumors are to be believed. So we know the multiverse is coming to the MCU very, very soon, and Peters’ version of Pietro could be the beginning of the walls between different realities breaking down.

Given the way Wanda is able to control the minds of everyone in Westview and thus controlling the reality of what is likely thousands of people, it’s not too much of a stretch to consider that in doing so, her powers are weakening the walls between worlds without her even realizing it. When the doorbell rings at the end of the episode to signal Pietro’s arrival, she tells Vision she didn’t do it, and she seems genuinely shocked by the turn of events.

Of course, Pietro’s return has been heavily foreshadowed for the last few episodes, ever since Wanda mentioned him to Geraldine, aka Monica Rambeau (Teyonah Parris), after giving birth to her twins. She also mentions him this week, and she speaks about him in the present tense. It’s possible that in doing so she inadvertently pulled in another universe’s Pietro to replace the dead one in her world. Whatever the case may be, Pietro’s return/arrival will likely have a major effect not just on Wanda — could this break her mind and kick off the potential House of M storyline that many believe is coming? — but also on the entirety of the Marvel Cinematic Universe as well.

New episodes of “WandaVision” are released Fridays on Disney+.