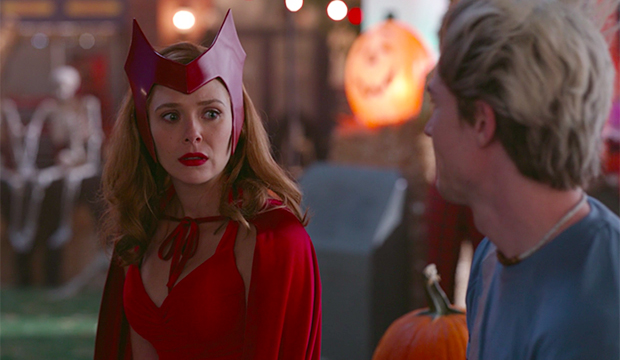 After the largely saccharine nature of the ‘80s episode last week, a pitch-perfect ’90s pastiche of “Malcolm in the Middle” (which actually premiered in 2000) in the sixth episode of “WandaVision” gave way to an eerie atmosphere of mystery and dread as Vision (Paul Bettany) struck out on his own and attempted to figure out what was going on in Westview while Wanda (Elizabeth Olsen) and Pietro (Evan Peters) supervised Tommy and Billy, who’ve begun to exhibit the powers of their comic book counterparts, during Halloween. It was another example of the show’s impressive ability to balance its many stylistic and narrative elements, especially when you consider the seamless transition to the S.W.O.R.D. action going on outside of Westview as well.

As Vision headed toward the town limits where Wanda’s influence meant people were largely static bodies — meant to give off an illusion of normalcy at a glance rather than being fully functioning like the people closer to the town square — the show-within-the-show featured a typical ‘90s storyline of Pietro blowing into town as the immature uncle who influences the twins and stirs up trouble. Outside of the boundary, Monica (Teyonah Parris), Agent Woo (Randall Park) and Darcy (Kat Dennings) worked in secret to figure out what Hayward (Josh Stamberg) was up to before meeting up with Teyonah’s mystery contact who could build her what she needed to safely enter the Hex without falling victim to Wanda’s influence again.

But after Vision encountered Agnes (Kathryn Hahn) near the boundary of the Hex and removed Wanda’s influence, the frightened person within revealed to him that he was an Avenger and that he was dead, neither of which he seemed to understand. It makes sense that Vision wouldn’t know he was dead — he said last week he has no memory of his life before Westview — but it seems that Wanda, whether knowingly or not, has erased all knowledge of the outside world from his memory as well. This means Vision somehow knows he’s a synthezoid but doesn’t know Tony Stark (Robert Downey Jr.). It’s enough to leave anyone unnerved, but it only spurred Vision into action. In what was easily the series’ saddest moment, he broke through Wanda’s magic at the boundary to plead with the S.W.O.R.D. members on the other side to help the people inside, all at the expense of his own life, since his body began to flake and disintegrate once outside of the boundary.

While this was happening, Wanda was attempting to figure out why this version of Pietro was different from the one she had known, testing his knowledge about their lives and even asking him what happened to his accent, to which he countered by asking what happened to hers. (Between this and last week’s commentary about Wanda and Captain Marvel [Brie Larson] being powerful enough to defeat Thanos [Josh Brolin], it seems Marvel has been paying attention to the fandom’s complaints and observations about various narrative choices within the MCU.) But what’s most interesting about Wanda and Pietro’s conversations is that they revealed that he knows what’s going on inside Westview. He’s not under her influence. Like Agnes and Herb (David Payton), who reappeared this week, he too understands what Wanda is doing, and even asked her how she was able to do it all. Which raises several questions.

Who brought Pietro to Westview, and why?

Many viewers assumed the arrival of Peters’ Pietro at the end of the fifth episode was Marvel’s way of hinting at the inevitable introduction of the X-Men and the multiverse, the latter of which we know is coming sooner rather than later. But what if Pietro is not meant to serve that purpose at all? During a quiet heart-to-heart at the town’s Halloween celebrations, Pietro asked Wanda how she’d created the Westview anomaly, and she revealed she wasn’t sure. “I don’t know how I did it,” she said. “I only remember feeling completely alone. Empty. Just endless nothingness.”

When she looked at Pietro after her confession, she saw him to be dead and full of bullet holes. This was similar to what happened with Vision in episode 4 after Monica broke the spell of Westview by mentioning Pietro being killed by Ultron. So, if Pietro is like Vision — a reanimated corpse who can only exist within the boundaries of the Hex — this might not be the major X-Men introduction we all thought it was. It’s possible that Wanda unknowingly brought Pietro back to life but pulled in a different body from another universe rather than her own. But Pietro also seems to know a lot of things he shouldn’t  — like that Vision is actually dead — and he also seems to be fishing for answers.

Given that Wanda doesn’t know how she created the Hex even though she’s powerful enough to control it and extend its boundaries to save Vision (and turn the S.W.O.R.D. camp and nearly all of the agents, including Darcy, into a traveling circus), it seems there’s something larger and darker at play here. So, who’s Pietro working for? Who sent him?

SEE ‘WandaVision’: Who is Agnes? And who is censoring the broadcast?

Is this the work of Mephisto? And is the show introducing the Fantastic Four?

Wanda, Vision and Pietro were all dressed in recreations of their comic book characters’ costumes this week, which at first seemed like nothing more than a fun wink and nod to their origins. But could it be more than that? Could it be further confirmation that the series is drawing heavily from the comics for inspiration? More specifically, could this be the show pointing to the aftermath of the storylines of “Avengers: Disassembled” and “House of M,” wherein Wanda became emotionally unstable after losing her children because Mephisto erased them from existence? In the comics, she eventually also erased the powers of nearly all mutants on Earth and became entangled with Doctor Doom, famously the adversary of the Fantastic Four.

This is obviously speculation and theory at this point, but with many people theorizing that the show has hinted at the introduction of the Fantastic Four via whatever S.W.O.R.D. is doing, and that Monica’s contact she’s on her way to meet at the end of this week’s episode could be none other than Reed Richards, aka Mister Fantastic, it’s becoming harder and harder to rule it out as a possibility.

And not to make things even more confusing, but with the boundary of the anomaly rewriting cells on a molecular level, it also seems possible that Wanda might not be in the business of erasing mutants on the show (since they do not yet exist in the Marvel Cinematic Universe because Fox owned the rights when the MCU began) but possibly creating them. With only three episodes left, there are a lot more questions than answers, but it’s clear that “WandaVision” is completely changing the fabric of the Marvel Cinematic Universe as we know it, and the result is pretty dang cool.

New episodes of ‘WandaVision’ are released Fridays on Disney+.