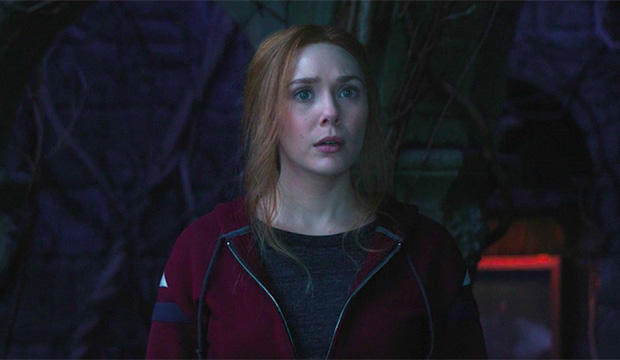 With only two episodes left in its run, “WandaVision” finally revealed its big bad in this week’s episode, titled “Breaking the Fourth Wall.” Or at least that’s what it wants us to think. Fans have been theorizing about the real identity of Kathryn Hahn’s neighbor Agnes since before the Disney+ show debuted, and then again after S.W.O.R.D. was unable to identify her alongside the rest of Westview’s residents in “We Interrupt This Program.” At the end of this week’s pitch-perfect homage to the fourth-wall-breaking single-camera comedies of the 2000s like “Modern Family” and “The Office,” Agnes finally reveals herself to be Agatha Harkness, the witch everyone presumed her to be, complete with a perfect witch cackle.

Near the end of the episode, Monica (Teyonah Parris) breaks through the barrier of the Hex for a third time, becoming superpowered in her own right and seemingly setting the character up to finally become the comic book character Spectrum. Monica’s return to Westview naturally upsets (Elizabeth Olsen), who uses her powers in full view of the town during their confrontation, and Agnes intervenes before things get too out of hand. But when Wanda goes looking for her kids in Agnes’ basement (it should be noted the character lives in Samantha’s house from “Bewitched,” in case you needed more evidence she was a witch), she finds a crypt crawling with vines and pretty much everything you’d see and think “Yes, I do believe a witch lives here.”

Agnes then introduces herself to Wanda as Agatha Harkness, and a new credits sequence for a TV show called “Agatha All Along” plays, revealing how Agatha has been manipulating several significant events in Wanda’s life, including the sudden arrival of Pietro (Evan Peters) and killing Sparky the dog. After a few episodes spent trying to make viewers believe Wanda was behind everything and it was all related to the character’s grief, the Agnes reveal is a well-timed one, if not entirely shocking. But what does this new information mean?

What does Agatha want with Wanda?

In the comics, Agatha Harkness is a mentor of sorts to Wanda. But the two also clash when Agatha removes Wanda’s memories of her children after they were erased from existence when Mephisto reclaimed their souls. This breaks Wanda and sets her on the destructive path that plays out in the “Avengers: Disassembled” and “House of M” storylines. Billy and Tommy are currently missing in “WandaVision” after spending the day at Agatha’s house while a depressed Wanda spent the day at home alone as Vision (Paul Bettany) got a major information dump from Darcy (Kat Dennings). This only seems to add more weight to the theory that Wanda is headed for the same fate as her comic book counterpart, especially when you recall that her grip on reality is beginning to crack, as items around the house kept shifting between the different decades.

But what does Agatha want? It makes sense for her to be the series’ big bad in a sense, but at the same time, what does she get out of manipulating Wanda? What is her motivation to do so? We now know she is manipulating Pietro (who returns in the episode’s post-credit sequence while Monica investigates Agatha’s house) in order to find out how Wanda is able to manipulate reality. But with only two episodes left, the show has answered one of its biggest questions while creating several more in the process.

SEE Is ‘WandaVision’ setting the stage for the Fantastic Four?

Is Agatha the big bad or is she working for someone else?

The fact that Billy, who’s been hearing the people of Westview in his head, described Agatha as being quiet inside feels significant. In fact, when you only have nine episodes that run for less than 30 minutes each, everything that happens is significant (lookin’ at you, sudden return of Dottie!). So this likely points to more than Agatha not being controlled by Wanda like the rest of Westview’s residents and perhaps is meant to reveal that she is a puppet (albeit a powerful one) doing someone else’s bidding. But to what end? Is someone attempting to use Agatha to understand or harness Wanda’s power? Perhaps they also want to use the powers of the twins?

The commercial in this week’s episode seems to hold some clues. The advertisement is for an antidepressant drug called Nexus; thematically, it ties into Wanda’s obvious depression, but like so much else, Nexus is also important in Marvel comics lore.

What is Nexus and why is it important?

In the comics, Nexus refers to the cross-dimensional gateway that connects any and all possible realities. This seems pretty important when we know the events of “WandaVision” lead directly into “Doctor Strange in the Multiverse of Madness” (2022) and will also have some effect on the third “Spider-Man” film that is set to be released later this year. The commercial even says Nexus can anchor you back to your reality “or the reality of your choice.”

You don’t have to be Sherlock Holmes to read between those lines. The introduction of the multiverse is coming, and it’s coming soon. We’ve been speculating all season about how the show is going to introduce the multiverse, and it clearly wasn’t with the introduction of Peters as Pietro, so it must be via Agatha (whose power is depicted with the color purple as opposed to Wanda’s red) and whomever she’s working with.

There are a lot of questions still to be answered as we head into the final two episodes of “WandaVision,” but with Vision now caught up to speed and Monica finally superpowered, it’s probably going to be an epic race to the finish.