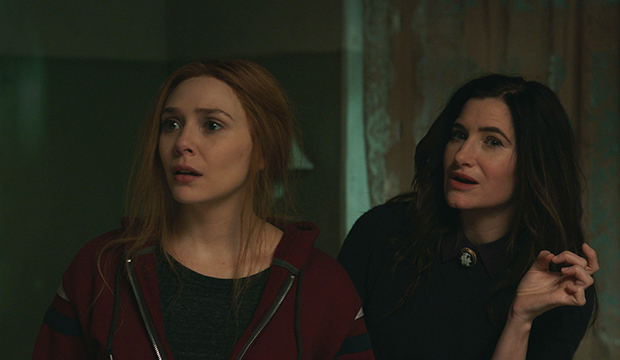 In the wake of the big Agatha Harkness (Kathryn Hahn) reveal last week, “WandaVision” pumped the brakes in the penultimate episode, aptly titled “Previously On,” to deliver the Cliff Notes version of the most traumatic experiences in Wanda’s (Elizabeth Olsen) life. This serves two purposes: It allows the show’s viewers who are not well versed in the events of the Marvel Cinematic Universe to be caught up to speed, and it explains how Wanda got to this point.

It does all of this via Agatha, who is determined to find out who Wanda is and how she is able to manipulate reality on such a large scale when it’s not even something she, an exceptionally powerful witch with ties to Salem, can do. Acting as a guide, she takes Wanda (and thus the viewers) through the death of Wanda’s parents in Sokovia; the experiments with Hydra that everyone believed gave Wanda her powers; her time at the Avengers compound with Vision (Paul Bettany) circa “Captain America: Civil War” (2016); and then finally her trip to S.W.O.R.D. headquarters to see Vision’s body, which, despite what we’d been told by Hayward (Josh Stamberg), ends with her leaving the compound without him.

This entire sequence is enlightening in that it reveals two things: First, it tells us that Wanda did not receive her powers from the Mind Stone like we were led to believe in “Avengers: Age of Ultron” (2015). Rather, the Mind Stone amplified power that was already there. (Frankly, this explanation makes way more sense given that Wanda’s powers have always been more tied to reality rather than the mind.) Because of this, Agatha believes Wanda is an actual witch and describes Wanda’s powers as being Chaos Magic before revealing to Wanda (and thus the audience) that she is the Scarlet Witch. Although MCU fans have been referring to Wanda by this name for years now, it’s never been used onscreen until now. It seems, at least within the series, that the Scarlet Witch is a prophesied witch of immense power, someone who has the ability of spontaneous creation.

The other major reveal of the episode is that there are now two Visions. There is the Vision that we’ve been hanging out with all this time who was ultimately created by Wanda after she saw the Westview property OG Vision had purchased for them to call home (so Wanda could live out all of her sitcom fantasy dreams). The compounded grief of losing her parents, her brother and OG Vision was too much for her, and her grief manifested itself as an explosion of immense power, creating Vision and a perfect sitcom-worthy home before extending to envelope the entire town of Westview.

The other Vision, whom we meet in the episode’s post-credits sequence and whom we’ll call White Vision, is built by Hayward from OG Vision’s body and powered by Wanda’s magic from the Hex. Hayward has now broken the Sokovia Accords and gone against Vision’s living will, which will likely not end well for him. But until that day comes the question is: Who is this version of Vision? And what does this mean for the “WandaVision” finale?

Who is the White Vision?

In the comics, Vision’s personality is the result of a combination of programming and Wonder Man’s brain pattern. At one point, Vision’s body was destroyed and dismantled, and although he was eventually put back together by Hank Pym, it was without the use of the brainwaves, so Vision became emotionless and colorless (though he still fought as an Avenger). As we’ve seen in the MCU, Vision’s body is vibrant and full of saturated color when he’s alive. Without the Mind Stone to give him life, though, his $3 billion dollar vibranium android body is devoid of color. So this all-white version of the character is likely meant to represent the complete opposite of the heroic Vision we’ve come to know and love. But is he a villain? Without his personality and humanity, it sure seems that way.

What does the introduction of White Vision mean for the finale?

Although the all-white Vision of the comics wasn’t a villain, it seems that we’re headed for a Vision vs. Vision showdown in the “WandaVision” series (season?) finale. And if you need more evidence, Bettany himself told Esquire that the show had given him the opportunity to work with an actor he’d longed to work with all his life. “We have some amazing scenes together and I think the chemistry between us is extraordinary,” he told the magazine. Now we know Bettany was talking about himself. It was an expert troll job, and you have to respect it.

But there’s still the matter of Agatha vs. Wanda in the finale as well. When we last see the two women, Agatha is holding Billy and Tommy hostage, going on and on about how Wanda has no idea about the extent of her powers. It seems like we’re headed for an epic showdown between the two witches, which might also include Monica (Teyonah Parris), who was suspiciously absent this week after her encounter with Fake Pietro/Fietro (Evan Peters) in last week’s post-credits sequence. With that much power in one place, it might be enough to, say, rip a hole in reality and/or open the multiverse? Just saying, it’s something to consider.

The “WandaVision” finale will be released March 5 on Disney+.