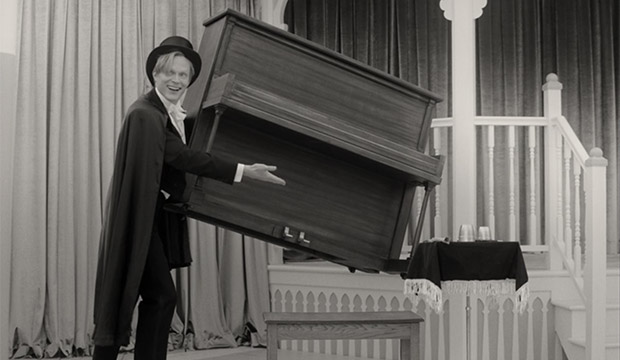 For several years I’ve jokingly advocated for the Emmys to add a category specifically for drunk acting. It started when Jake Johnson took acting inebriated to a whole new level as Nick Miller on “New Girl,” but I was again reminded just how tough it can be to portray someone who’s drunk when Paul Bettany humorously nailed it, with purposeful exaggeration, in “WandaVision’s” second episode, “Don’t Touch That Dial.”

In the 1960s-set episode, which draws heavily from the Emmy-winning comedy “Bewitched,” Bettany’s Vision, an android with a synthetic body, accidentally swallows a piece of gum. Because he’s not human, the gum messes with his robot-y circuits or whatever (sorry, I’m not a genius billionaire playboy philanthropist and have no idea how anything works) and the outward effect is that he begins to act oddly, like an overly intoxicated person. His speech is slurred. He has no filter and tells the people of Westview he’s about to lie to them just before his magic act with Wanda (Elizabeth Olsen), who has to scramble to find plausible, real-world explanations for Vision’s powers once he starts levitating, phasing objects through his body and lifting pianos with ease. But the true highlight of Bettany’s entire performance might be when he repeatedly yells “Flourish!” when he should just do the movements associated with the word. “You just do it. You don’t say it out loud, honey,” Wanda says at one point.

It’s an excellent performance, one that is perfectly in tune with the TV show(s) “WandaVision” is emulating in the episode. It’s also an over-the-top turn, so while it doesn’t necessarily fit with the main criteria for Best Drunk Acting, which relies heavily on realism and authenticity, it deserves to be recognized for what it is: a scene-stealing performance and further proof that Bettany is — and has been for more than 20 years — an excellent comedic performer. It’s time we properly recognize this and honor him with an Emmy nomination for Best Limited/TV Movie Actor.

Not only is recognition long overdue for the Brit — his only major acting bid was a Best Supporting Actor BAFTA nomination for his performance in “Master and Commander: The Far Side of the World” (2003) — but the Emmys are also well past the point of needing to acknowledge comedic performances in the limited series categories. Dramatic roles are not inherently better or even more difficult to pull off, but they still tend to dominate because they are often more effective in eliciting a sustained emotional response and therefore stick out in voters’ memories. It feels a bit reminiscent of the Oscars regularly failing to recognize comedic films in the race for Best Picture. This is why even though Bettany is currently in third place in Gold Derby’s combined odds for limited/TV movie actor behind Ethan Hawke (“The Good Lord Bird”) and Hugh Grant (“The Undoing”) — two actors whose shows have underperformed in various ways, mind you — a nomination still doesn’t feel guaranteed. Luckily, Bettany also proves on “WandaVision” that his scene-stealing abilities don’t necessarily stop at comedy.

While “WandaVision” might be very funny and pay homage to beloved sitcoms of days past, it doesn’t operate as a never-ending joke machine. The narrative is ultimately grounded in Wanda’s compounded grief over losing Vision and the promise of a happy life together after his death in “Avengers: Infinity War” (2018), which came on the heels of the death of her twin brother (Aaron Taylor-Johnson) in “Avengers: Age of Ultron” (2015). The series’ TV show framework allows Bettany (and Olsen!) to pivot between comedic highs and dramatic lows from episode to episode and fully show off his range. And it’s Bettany’s ability to bounce between zany and drunk in “Don’t Touch That Dial” and scared and angry in the emotional, ’80-set “On a Very Special Episode…” — which ends with Vision confronting Wanda about what’s going on in Westview and confessing how frightened he is that he can’t remember who he is or his past — that makes his performance that much more impressive.

As the Disney+ series moves through the decades with each passing episode, the genres and styles of the show change and Bettany skillfully and effortlessly adapts his approach and performance alongside them. It seems like every actor’s dream role. But Bettany is truly never better than when he’s making viewers laugh as Vision, a character who started out in the MCU as an artificial intelligence who had little personality before the show allowed Bettany to stretch his acting muscles and explore his humanity. A nomination for the actor would highlight not just his comedic prowess, which was also top notch in the slapstick of the show’s ’50s-set episode, but everything he has been able to do with the character since bringing him to life in “Ultron.” The fact that it could also go a long way in eliminating or at least limiting any bias voters might have against Marvel or similar superhero shows is honestly just a bonus at this point.