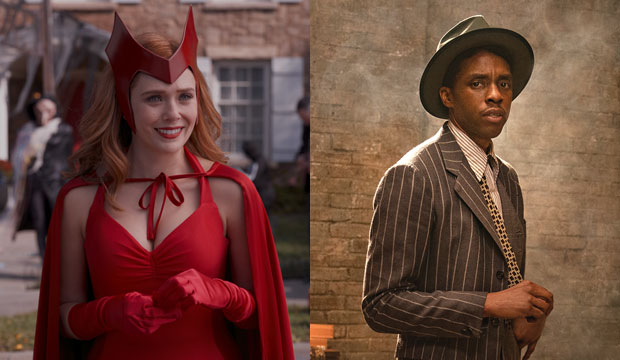 It was “WandaVision” all along at the MTV Movie and TV Awards, which were presented live on Sunday night, May 16, during a ceremony hosted by Leslie Jones. Check out the complete list of winners here.

“WandaVision” had six nominations and won four: Best Show, Best Performance in a Show (Elizabeth Olsen), Best Villain (Kathryn Hahn), and Best Fight (Olsen vs. Hahn). But that wasn’t the end of the awards domination for the Marvel Cinematic Universe. “The Falcon and the Winter Soldier” was nominated for two awards and it won both of them: Best Hero (Anthony Mackie) and Best Duo (Mackie and Sebastian Stan). That means the MCU won almost half of the competitive prizes that were handed out. And then one more if you count the honorary Generation Award for the erstwhile Black Widow, Scarlett Johansson.

Television overshadowed film throughout the night, with motion pictures prevailing only three times. Telecast host Jones won Best Comedic Performance for Amazon’s sequel “Coming 2 America.” Meanwhile, Best Movie was won by “To All the Boys: Always and Forever” in its sole victory (its only other nom was Best Musical Moment). And Best Performance in a Movie went to Chadwick Boseman (“Ma Rainey’s Black Bottom“) in a posthumous win that comes three years after he accepted the same prize for “Black Panther.” So there were Avengers everywhere you turned on Sunday night.

But the MTV Movie and TV Awards aren’t over. A second night of prizes will go out on Monday, May 17, to the best in reality TV as voted on by fans. What did you think of Sunday’s winners, and who do you expect to prevail on Monday?