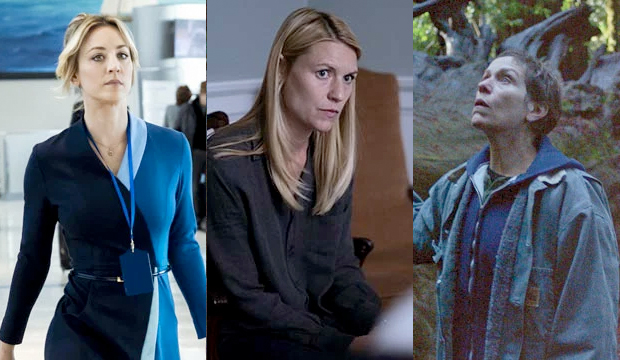 Even though this year’s Directors Guild of America ceremony is taking place virtually, there is no way to watch the DGA Awards online. But you’re in luck — Gold Derby has access to Saturday’s show and we’ll be revealing all of the 2021 winners as they happen live. Scroll down for our minute-by-minute breakdown of all of the champions, the A-list presenters and the special honors for this 73rd annual ceremony.

As a reminder, these kudos honor the best helmers of the year in film and television, as voted on by more than 18,000 members of the directing guild. The all-important DGA feature film category, which will be presented last, will serve as an important bellwether of the Best Director Oscar. Why? Because the guild and the academy have only disagreed eight times over the past seven decades, including last year when Sam Mendes (“1917”) won the DGA but Bong Joon Ho (“Parasite”) claimed the Oscar.

In addition to the competitive categories, special honors will be handed out to Brian E. Frankish, Joyce Thomas, Betty Thomas and Paris Barclay. But enough chit-chat — let’s get to the 2021 DGA Awards!

4:55 p.m. — Five minutes to showtime! We just received word that DGA President Thomas Schlamme (a nominee tonight for “A West Wing Special to Benefit When We All Vote”) will give the introduction to the ceremony. Following that, the first category of the evening will be for TV comedy series. Who’s ready?!

5:00 p.m. — The show starts right on time with a peppy clip show/retrospective of all of the year’s film and TV nominees, set to the song “Golden Age” by Zayde Wolf.

5:04 p.m. — Here’s Tommy! He’s standing in a real-life theater. Remember those? He wishes “we can all be together, breathing the same air” and welcomes the nominees from around the world who are watching from their own homes. Schlamme is pleased this “virtual world” is giving access to the ceremony to nominees who normally wouldn’t have been able to attend.

5:10 p.m. — Best Comedy Series Director is the first award of the night, presented by Bill Hader. And the winner is … Susanna Fogel (“The Flight Attendant” for “In Case of Emergency”). She took down fellow nominees Zach Braff (“Ted Lasso” for “Biscuits”), MJ Delaney (“Ted Lasso” for “The Hope that Kills You”), Erin O’Malley (“Curb Your Enthusiasm” for “The Surprise Party”) and Jeff Schaffer (“Curb Your Enthusiasm” for “The Spite Store”).

5:12 p.m. — Children’s series director Tina Mabry is presenting Best Children’s Program Director. The trophy goes to … Amy Schatz (“We Are the Dream: The Kids of the Oakland MLK Oratorical Fest”). The other nominees were Kabir Akhtar (“High School Musical: The Musical: The Series” for “Opening Night”), Larissa Bills (“On Pointe” for “Showtime!”), Dean Israelite (“The Astronauts” for “Countdown”) and Richie Keen (“The Healing Powers of Dude” for “Second Step: Homeroom”).

5:15 p.m. — Now there’s a special tribute to “Minari” director Lee Isaac Chung. They’re showing the clip from the beginning of the film when the family first arrives at their new mobile home. Chung talks about what it means for him to be a director, and he tells a story about his dad, who “loves movie” and watched them nonstop growing up in Korea. Aww.

5:21 p.m. — Best Variety Special Director is up next, presented by legendary director James Burrows. The winner is … Thomas Schlamme (“A West Wing Special to Benefit When We All Vote”). He talks about how winning an award for “The West Wing” is like “going home again” and references the real-life struggle for voter rights. The DGA prez beat out fellow nominees Stacey Angeles (“The Daily Show with Trevor Noah Presents ‘Remembering RBG: A Nation Ugly Cried with Desi Lydic'”), Marielle Heller (“What the Constitution Means to Me”), Jim Hoskinson (“The Late Show with Stephen Colbert” for “Stephen Colbert’s Election Night 2020: Democracy’s Last Stand: Building Back America Great Again Better 2020”) and Spike Lee (“David Byrne’s American Utopia”).

5:27 p.m. — Honor time! Lesli Linka Glatter gives the Robert B. Aldrich Achievement Award to Betty Thomas and shows a fun clip of her trying not to curse from a prior DGA ceremony. Thomas knows these speeches have to be short, so she wants to start “with her birth.” Lol, that’s a good one. As a former waitress, she considers this award to be the “best tip” of her life.

5:32 p.m. — Now there’s a special tribute to “The Trial of the Chicago 7” director Aaron Sorkin. The clip of choice is the moment where the protesters consider rushing the police for the first time — and they’re not bleeping any of the F-words! Sorkin says he’s only been a member of the guild since 2016, making him one of the newbies. He says “water turned to wine” during his experience on the “Trial” movie.

5:39 p.m. — For fans of commercials, this next category will be right up your alley. Best Commercial Director is presented by Spike Jonze, with special guest Tiffany Haddish playing Spike’s secret personality. The trophy goes to Melina Matsoukas (Beats by Dre’s “You Love Me”). The other contenders were Steve Ayson (Nike’s “The Great Chase”), Nisha Ganatra (Bodyform/Libresse’s “#wombstories”), Niclas Larsson (VW Touareg’s “See the Unseen,” Volvo XC60’s “The Parents”) and Taika Waititi (Coca-Cola’s “The Letter”).

5:44 p.m. — It’s time for an honorary award, this time to Brian E. Frankish for the Frank Capra Achievement Award. The presenter is Phil Alden Robinson. “I love movies and their magic,” declares Frankish during his acceptance speech.

5:50 p.m. — Another honorary award goes to Joyce Thomas for the Franklin J. Schaffner Achievement Award. The presenter is Scott Berger. Thomas thankfully survived Covid-19 last year, calling 2020 a “catastrophic year.” She says about her fellow guild members, “Thank you for allowing me to represent you.”

5:55 p.m. — Now it’s David Fincher‘s time for a special tribute for his latest film, “Mank.” They’re showing a clip of Gary Oldman chatting with Charles Dance on a movie set about how “times are changing.” Fincher talks about how he used to draw in notebooks when he was younger, but he gave that up for movie-making, something he says is “infinitely more complicated.”

5:59 p.m. — TV fans have been waiting all night to find out the winner of Best Drama Series Director, and presenter Nicole Kassell gets the honor of announcing it. Lesli Linka Glatter (“Homeland” for “Prisoners of War”) wins and mentions how it’s the show’s “last hurrah.” Her fellow nominees were Jason Bateman (“Ozark” for “Wartime”), Jon Favreau (“The Mandalorian” for “Chapter 9: The Marshal”), Vince Gilligan (“Better Call Saul” for “Bagman”) and Julie Anne Robinson (“Bridgerton” for “Diamond of the First Water”).

6:07 p.m. — “Promising Young Woman” director Emerald Fennell gets the tribute treatment now for her film starring Carey Mulligan as a woman who gets revenge on creepy guys at bars. The designated clip is the one where she confronts her old friend (Alison Brie) at a restaurant about her former behavior. Fennell admits she “always wanted to make things” in whatever form that took, and that she was always “obsessed” with film and TV growing up. Join the club!

6:12 p.m. — The first motion picture category of the night is here, with Best First-Time Film Director being presented by last year’s champ, Alma Har’el. And the winner is … Darius Marder (“Sound of Metal”). He feels like he knows all of the other nominees because of this whole virtual world that we’re living in today. They were: Radha Blank (“The 40-Year-Old Version”), Fernando Frías de la Parra (“I’m No Longer Here”), Regina King (“One Night in Miami”) and Florian Zeller (“The Father”).

6:20 p.m. — The penultimate category of the night, Best Documentary Film Director, is presented by Matthew Heineman. It goes to Michael Dweck and Gregory Kershaw (“The Truffle Hunters”), who readily admit, “We were not expecting that.” They triumphed over all of these folks: Pippa Ehrlich and James Reed (“My Octopus Teacher”), David France (“Welcome to Chechnya”), Amanda McBaine and Jesse Moss (“Boys State”) and Benjamin Ree (“The Painter and the Thief”).

6:29 p.m. — The last special tribute is for Chloé Zhao (“Nomadland”). They show a touching clip of Frances McDormand‘s van-dweller meeting a man on the road who tells her she hopes she finds the answers she’s looking for. Zhao speaks from — what else? — a van while wearing a camouflage puppy jacket. She finds that audiences come away from movies like hers “feeling a little bit less alone” in the world.

6:33 p.m. — Paris Barclay is the recipient of this year’s Honorary Lifetime Member Award, presented by Ava DuVernay. “I am incredibly grateful,” Barclay says while naming some of the other “personal heroes” that have received this award.

6:40 p.m. — Here it is. The final award of the night, Best Feature Film Director. It’s presented by Sam Mendes, who prevailed last year for “1917.” And the winner is … Chloé Zhao (“Nomadland”). She spends her entire speech singling out her deserving competitors for “teaching me so much”: Lee Isaac Chung (“Minari”), Emerald Fennell (“Promising Young Woman”), David Fincher (“Mank”) and Aaron Sorkin (“The Trial of the Chicago 7”).

6:45 p.m. — Thomas Schlamme closes out the evening, revealing how there were no technical mess-ups. “The best part? You don’t have to drive home,” he jokes. And that’s a wrap!