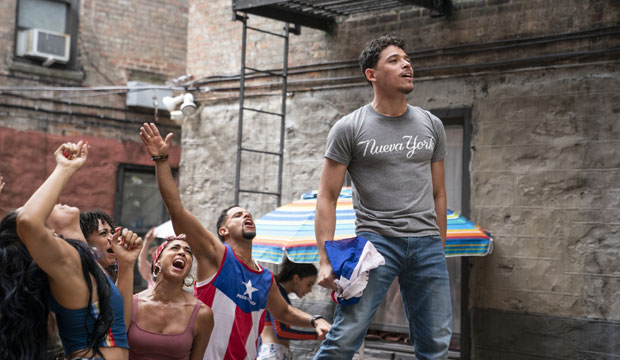 Nearly universal critical praise and the deafening online buzz were not enough to push Jon M. Chu’s “In the Heights” to the top of the box office charts during its debut weekend. Despite expectations that the musical adaptation would win the weekend crown and potentially gross as much as $20 million during its opening frame, “In the Heights” finished with an estimated $11.4 million at the North American box office. That figure put the Lin-Manuel Miranda adaptation in second place overall on the charts, behind surprise weekend victor “A Quiet Place Part II,” which earned a reported $11.7 million en route to becoming the first release to cross the $100 million mark in North America since the coronavirus pandemic began.

So what happened to “In the Heights” during its opening weekend? Like all previous Warner Bros. films released in 2021, “In the Heights” debuted simultaneously in theaters and via the WarnerMedia streaming service, HBO Max — although it’s unknown how the film’s at-home availability affected its theatrical ticket sales. (WarnerMedia has not shared viewership data around its movie releases.) Of note, however, is the small track record of Warner Bros. movies to have been given day-and-date releases this year. “Tom and Jerry,” “Godzilla vs. Kong,” “Mortal Kombat,” and even recent release “The Conjuring: The Devil Made Me Do It” — all movies based on intellectual property and successful franchises — performed relatively well at the box office while streaming in homes, but original projects such as “The Little Things” and more recently “Those Who Wish Me Dead” fared much worse. “In the Heights” arguably split the difference: it’s based on a successful, Tony Award-winning musical from Miranda, but doesn’t have the same awareness in mass culture as something like “Hamilton” or, perhaps more relevantly, “A Quiet Place Part II.”

Despite the less-than-stellar debut, however, it’s expected “In the Heights” will remain a strong release for weeks to come. Word-of-mouth has been good so far — the movie received an A-grade on Cinemascore — and musicals often exhibit strong legs. Back in 2017, “The Greatest Showman” disappointed during its opening over the Christmas holiday, but wound up earning more than $435 million in theaters worldwide and played in theaters through the end of July 2018.

Rounding out the top-five at the box office this weekend was fellow new release “Peter Rabbit 2: The Runaway” (which earned an estimated $10.4 million in its debut), “The Conjuring 3” (which dipped from its lofty $24 million opening to just $10 million in weekend two), and “Cruella” (which grossed another $6.7 million despite also being available as a Disney Plus Premier Access title).

Kaitlin Olson ('Hacks') on her Emmy nomination for playing a 'broken person who has a big, big heart'…

'Hacks' star Hannah Einbender on making merry with Jean Smart: 'She has a young spirit and I'm an old…