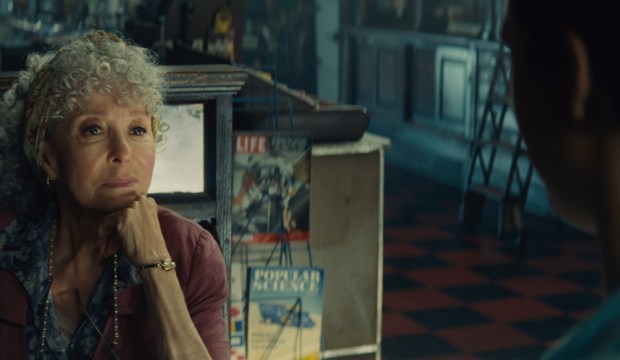 Will there be a place for legendary actress Rita Moreno at the 2022 Oscars? Following the first screenings of Steven Spielberg’s “West Side Story” in New York and Los Angeles on Monday night, journalists and awards pundits were already floating the possibility that Moreno, who won her first and only Academy Award for the original “West Side Story” film in 1962, could be back at the Oscars again for the same project 60 years later.

If that happens, Moreno would once again make Oscars history on multiple fronts. Moreno, who turns 90 on December 11, would become the oldest performer ever nominated for an Academy Award, surpassing Christopher Plummer (who was 88 when he received recognition for “All the Money in the World”). The 60-year gap between her first and only Oscar nomination and a potential second would also put Moreno in the record books — surpassing the 41-year space between acting nominations for Henry Fonda. Moreno would also be the first person ever nominated for playing a different role in the same feature — while her victory for “West Side Story” came for playing Anita, her role of Valentina was created specifically for the Spielberg remake. (Valentina runs the drug store that the character Doc managed in the original film.)

Back in 1962, Moreno’s victory for the original “West Side Story” was no less historic. She became the first Hispanic actress to win an Academy Award. Her acceptance speech also clocked in as one of the shortest of all time. “I can’t believe it! Good Lord. I leave you with that!” Moreno said.

In the years following her Oscar win, Moreno won at the Emmys, Grammys and Tony Awards to secure the prestigious EGOT designation.

“I’m not a person who thinks of legacy. It’s like people say something you’ve become the representative. The truth is, you don’t start out wanting to become a legacy,” she told Gold Derby earlier this year after the premiere of “Rita Moreno: Just a Girl Who Decided to Go For It,” a documentary on her life. “That isn’t the goal. You’re not starting out to be a representative of anything. You just want to be an actress, and you want to be in the movies. I just wanted to be in the movies. All of these added things are kind of a mystery to me because I don’t see myself that way. Let’s just say that.”

In addition to playing a key role in the new version of “West Side Story,” Moreno is also an executive producer on the project. “I wanted her to really, you know, bridge the legacy of ‘West Side Story’ and to inspire our young cast,” Spielberg told “60 Minutes” in a recent interview. As part of her performance, Moreno sings once again — although her signature number from the original, “America,” goes to actress Ariana DeBose who is now playing Anita — and provides an emotional backbone to the film.

“Rita Moreno is the heart of the whole thing,” one early viewer wrote online.

Variety deputy awards and features editor wrote of Moreno, “she might be the first actor to win for a new role in a remake of the film that won her first Oscar. ‘West Side Story’ reminds you why she’s a legend.” At The Hollywood Reporter, awards expert Scott Feinberg has Moreno listed tops among his predicted nominees in Best Supporting Actress.

That fairytale ending could happen, even though that category is already loaded — with front-runners like Kirsten Dunst for “The Power of the Dog” and Caitriona Balfe for “Belfast” competing against Aunjanue Ellis for “King Richard” and Ruth Negga for “Passing,” plus former Oscar winners Marlee Matlin for “CODA,” Meryl Streep for “Don’t Look Up,” and Cate Blanchett for “Nightmare Alley” in contention as well. Then there’s DeBose, whose performance was singled out in numerous “West Side Story” reaction tweets. But none of those performers, not even Streep, have the kind of narrative that Moreno will bring into the campaign.

“I think some people would say I was tough. I think it’s resilience because if I’m tough, there’s a part of me then that’s become hard. It’s simply not in my nature,” she told “60 Minutes” recently. “Resilient is what I am. I’m a real bouncer-backer.”

“West Side Story” is out on December 10.