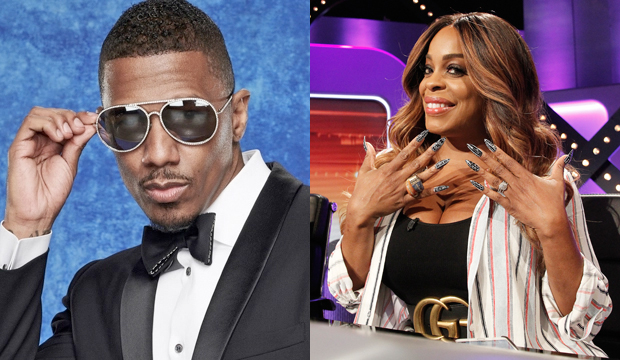 “Step right up and welcome to the three-ring circus known as ‘The Masked Singer,'” proclaimed Niecy Nash at the top of Wednesday’s season premiere. “They promised you game-changers this season and you’ve got your first one. A new guest host — me, Niecy Nash. Nick Cannon, I’m sending you all the good vibes. Hopefully we’ll see you later this season.” So what happened to Nick Cannon on “The Masked Singer” and why does he need “good vibes”? As it turns out, he was diagnosed with Covid-19 just prior to the start of production on Season 5, so producers hired a temporary replacement as he recovered at home. There is no word yet on when he will return.

Niecy, a three-time Emmy nominee for “Getting On” (2015 and ’16) and “When They See Us” (2019), was escorted onto the “TMS” stage in a queen’s throne carried by the silent men in black. “Looking like the queen she is,” Nicole Scherzinger declared as the crowd applauded her regal entrance.

After introducing herself to the audience at home, Niecy channeled Nick as she addressed Ken Jeong up on the dais. “Nick gave me permission to tell you, ‘Sit your butt down, Ken,'” she joked. The beloved panelist tried to argue that he already was sitting down, but she she simply shushed him in response.

This is actually Niecy’s second time appearing on the Fox reality program, after previously being a guest panelist in the seventh episode of Season 4. That’s the memorable episode when Clint Black & Lisa Hartman Black were revealed to be the Snow Owls. Last September, Niecy also appeared on Fox’s spiritual cousin series “I Can See Your Voice” as a panelist.

Season 5 of “The Masked Singer” has split up its contestants into Group A and Group B, with the first collection performing tonight. One by one, Porcupine, Raccoon, Russian Dolls, Seashell and Snail sang their hearts out for the panelists, with one being eliminated at the end of the episode. Group B will perform next week and consists of Black Swan, Chameleon, Grandpa Monster, Phoenix and Piglet.