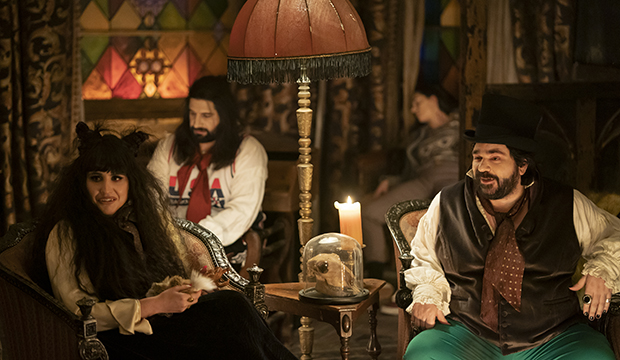 “What We Do in the Shadows,” the hilarious FX comedy about a trio of vampires living together on Staten Island with a human familiar, broke into the Emmys in a big way last year, earning eight nominations for its second season, including one for Best Comedy Series and three noms for comedy writing. Can the series, which was developed for TV by Jemaine Clement and Taika Waititi, build on that momentum to win at the upcoming Golden Globes and Screen Actors Guild Awards? The answer is: maybe!

The sophomore series, which stars Kayvan Novak, Matt Berry, Natasia Demetriou, Harvey Guillén and Mark Proksch, is currently sitting in fifth place in Gold Derby’s latest odds for the top prize at the Globes, behind the final season of Pop TV’s “Schitt’s Creek,” the first seasons of Hulu’s “The Great” and Apple TV+’s “Ted Lasso,” and the second season of Hulu’s “Ramy.” While the show’s combined odds of securing a nomination have been fairly steady, they have fallen a bit recently, while the sixth place comedy, HBO Max’s “The Flight Attendant,” is on the rise. Should the fan-favorite mockumentary manage to hold off the Kaley Cuoco-led series to nab a series nomination, it’s not totally unheard of for the Hollywood Foreign Press Association to honor a show that is in its second season. Just last year “Fleabag” and ”Succession,” both in their second seasons, triumphed in their respective categories.

But there is overwhelming support in the odds for “Schitt’s Creek,” which is coming off a historic sweep at the Emmys where it won quite literally every comedy category. While the Globes have yet to recognize the feel-good Canadian comedy, like “Breaking Bad” and “The Americans” before it, the series could be poised to win a catchup prize this year. Fourteen Experts are currently predicting the series to win. However, it’s worth noting that the HFPA has never nominated “Schitt’s Creek” while Emmy voters had previously nominated the show in four categories before going all in for Season 6. It’s certainly possible that changes this year, but a series nomination and win doesn’t feel nearly as inevitable here as it did at the Emmys.

Even if “What We Do in the Shadows” ultimately falls short of the series prize at the Globes, it could very well succeed at the SAG Awards. With four of last year’s nominees ineligible this year (“The Marvelous Mrs. Maisel,” “The Kominsky Method,” “Barry” and ”Fleabag”), the show has more than an excellent shot at breaking into the race for comedy ensemble. In fact, it’s currently sitting in third place in Gold Derby’s odds, behind only “Schitt’s Creek” and Netflix’s “Dead to Me” after recently overtaking HBO’s “Insecure.”

Voters also likely won’t hold the comedy’s “advanced” age against it, especially since SAG-AFTRA often overlooks first-year shows. The cast of “The Marvelous Mrs. Maisel” won back-to-back awards in 2018 and 2019 for the Amazon series’ second and third seasons after not even being nominated for Season 1. In fact, the previous six winners for comedy ensemble were not freshman series: In addition to “Maisel,” they include the casts of the sixth season of HBO’s satirical comedy “Veep,” and the second, third and fourth seasons of Netflix’s “Orange Is the New Black.”

Given its Emmy domination, “Schitt’s Creek” is stronger at the SAGs, where it was double-nominated last year, than it is at the Globes. But if voters have tired of the same ol’ “Schitt,” it’s possible some of the voting body would like to move on after the show’s overwhelming performance at the Emmys, so there’s reason to believe “What We Do in the Shadows” could break through to take the ensemble prize. If it does, we might have to contend with the fact that vampires aren’t quite over yet.