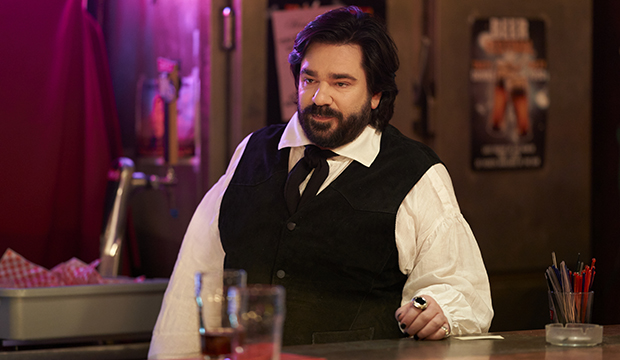 Although Jackie Daytona, regular human bartender, might not like all the attention, there is a lot of buzz surrounding the second season of FX’s exceptional vampire comedy “What We Do in the Shadows.” Coming off an impressive eight nominations between the Primetime and the Creative Arts Emmys last year, the series is predicted to keep on rolling at the Golden Globes.

The show is currently sitting in fifth place in Gold Derby’s odds to nab a nomination for Best Comedy Series, while star Matt Berry, who plays the centuries-old vampire Laszlo, is in fourth place in the Best TV Comedy Actor race. Though “Shadows” received eight Emmy nominations, none were for acting. Should Berry get in, it will be his first Golden Globe nomination. He’s currently trailing Eugene Levy (“Schitt’s Creek”), Jason Sudeikis (“Ted Lasso”) and reigning champ Ramy Youssef (“Ramy”). Rounding out the top five is Nicholas Hoult (“The Great”).

So far Berry, who is well known across the pond, is the only member of the cast predicted by Gold Derby’s odds to receive a nomination for their performances in Season 2. And it’s easy to see why. Berry headlined the funniest, silliest episode of the second season, “On the Run,” in which Laszlo goes on the run from Mark Hamill‘s ancient vampire who’s seeking payment for an old debt. Laszlo winds up in a small Pennsylvania town, adopting the regular human guy persona of Jackie Daytona, a bartender at Lucky Brew’s who becomes simply irresistible to the locals and an ardent supporter of the girls’ high school volleyball team. The episode quickly became a fan favorite — you something is an instant classic when you can just refer to it as “the Jackie Daytona episode” — and brought the show one of its three Emmy nominations for writing.

SEE Does ‘What We Do in the Shadows’ have enough bite to be successful at the Golden Globes and SAG Awards?

Working in Berry’s favor is that only two of last year’s nominees — Youssef and Ben Platt (“The Politician”) — are eligible to return. That’s also good news for his co-star Kayvan Novak, who plays the vampire Nandor and just eked out a spot in the top 20 in the comedy actor category. Novak was recently nominated for a Critics’ Choice Super Award.

Meanwhile, Natasia Demetriou, the show’s lone female series regular (and recent winner of the Critics’ Choice Super Award for Best Actress in a Science Fiction/Fantasy Series), is in 11th place in the odds for Best TV Comedy Actress. Although the Hollywood Foreign Press Association loves to honor breakthrough performances — and I would argue that despite this being the show’s second season, Demetriou very much still fits the bill — competition is fierce even with four of last year’s nominees not eligible. In the mix are Emmy champ Catherine O’Hara (“Schitt’s Creek”) and stars from first-year shows like Elle Fanning (“The Great”), Kaley Cuoco (“The Flight Attendant”), Jane Levy (“Zoey’s Extraordinary Playlist”) and Lily Collins (“Emily in Paris”).

Also complicating the show’s acting odds is the fact the Golden Globes do not have separate supporting categories for drama, comedy and limited series/TV movies, which means the Best TV Supporting Actor category, where Harvey Guillén and Mark Proksch are competing, is obviously stacked with talent. Although comedy actors have had success in getting nominated in recent years — three of the five actors nominated last year came from comedies — four of the last five winners were from limited series.

However, all hope is not lost. “What We Do in the Shadows” recently received five Critics’ Choice TV nominations: Best Comedy Series, Best Comedy Actor for Berry, Best Comedy Actress for Demetriou, and Best Comedy Supporting Actor for Guillén and Proksch. While this doesn’t guarantee success at the Globes as they have completely different voting bodies, it does reveal the show still has plenty of momentum and remains a serious awards contender, especially for Berry.