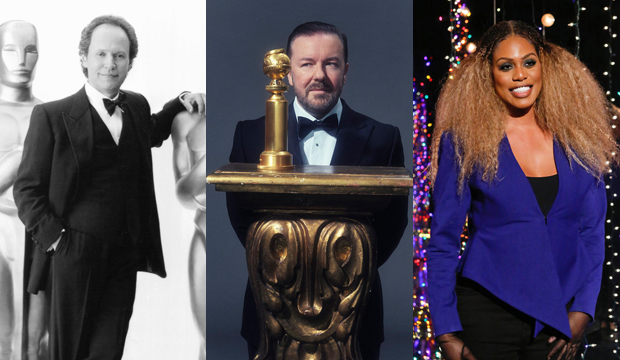 For the past two years, Hollywood’s biggest awards show has gone without a host. And without a hitch. Under normal circumstances, the third time might be a charm once again. But the coronavirus pandemic has changed everything. While the 93rd Academy Awards show will go on (on Sunday, April 25) the time might be right to bring back a proper emcee. Someone to engage the audience. Someone to nurture the nominees. And someone to wow the world as the Oscars show why it truly is the greatest awards show on earth.

So who should host the 2021 Oscars? Let’s take a look at eight obvious (and not-so-obvious) contenders.

1. Billy Crystal
With nine Oscar shows already under his belt, he would be like comfort food during these darkest days. We would expect his classic opening monologue plus a medley incorporating all of the nominated titles. With “Mank,” “Minari” and “Ma Rainey’s Black Bottom” all looking pretty likely, Crystal might miss the days of easy comedic targets like “The Silence of the Lambs” and “The Crying Game.” Always one to trigger tears of laughter, Billy would be a “mahvelous” choice as always.

2. Ricky Gervais
He’s best-known for roasting while hosting five Golden Globe Awards shows, most recently last year. Given that he’s never pulled his punches while standing in front of Hollywood’s most famous faces, imagine how he’ll ambush with so many of them absent. Jabbed by Gervais. Undone by Oscar. Contaminated by COVID. The pandemic nominees would be duly, truly and triply terrified.

3. Tina Fey and Amy Poehler
And speaking of Golden Globe hosts … the duo dazzled on each of their previous tries at the Beverly Hilton Hotel. While they’ll be on separate coasts as they marshal festivities later this month, expect them to shine just as bright. They teased us at the Oscars two years ago, as two of the night’s first presenters of the host-less show. They (along with Maya Rudolph) had the crowd roaring during their abbreviated oration, before announcing Best Supporting Actress. They might be the best leading actresses for this year’s high-wire Oscar act.

4. Maya Rudolph and Kristen Wiig
If anyone can challenge Fey and Poehler as the flag-bearers for funniest females, it’s Rudolph and Wiig. The pair managed to steal the show while announcing the Production and Costume Design winners last year. First, their cleverly staged stage fight demonstrated their acting muscles for the many directors (including an amused Martin Scorsese) in the audience. They later flexed their musical chops with a rib-tickling parody song. Maybe the Academy should pop the question, turning these former “Bridesmaids” into Oscar ceremony brides.

SEEMultiple Best Actress Oscar winners: Who won twice (or more) in the category?

5. Chris Rock
He’s rocked the Oscars twice before, in 2005 and 2016. The latter was the year of the infamous #OscarsSoWhite controversy, which put a damper on much of the awards season. This year’s slate looks to be significantly diverse, so Rock could focus more on laughs and less on lectures. It would also reunite him with likely nominee (for “The Father”) Anthony Hopkins, his co-star from 2002’s “Bad Company.” That’s pretty good company, and could make for a pretty great Oscar show.

6. Awkwafina
Last year, the Academy overlooked her acclaimed and emotional performance in “The Farewell.” But they could still welcome her as the 2021 hostess. She’s amassed an impressive list of film credits in just a few years, including 2018’s smash comedy “Crazy Rich Asians.” Her presence would highlight the Academy’s push for diversity, and also attract many younger viewers who otherwise wouldn’t tune in. Awkwafina delighted as an Oscar presenter in 2019. For one night this April, “Nora from Queens” could rule Hollywood.

SEEChristopher Plummer dead at 91: Our appreciation for the Oscar winner, ‘The Sound of Music,’ ‘Knives Out’ legend

7. Laverne Cox
Laverne surely doesn’t come to mind when you think of potential Oscar ringleaders. (But remember – neither did James Franco, Seth MacFarlane or Neil Patrick Harris.) Cox has proven to be one of the most original, ingenious and inspiring entertainers to succeed in show biz in quite some time. As the first transgender person to host the Academy Awards, she would make history as well as hilarity. Cox has been steadily building her film resume, including a sharp featured turn in the much-buzzed-about (and Oscar-bound) “Promising Young Woman.” Assuming the producers can coax Cox, she would be a most promising young mistress of ceremonies.

8. Tariq Khan and Tom O’Neil
Okay, so this is taking “thinking outside of the box” to a whole new level. But would it really be so nutty to have two of the world’s most notorious Oscar nuts host this year’s unprecedented affair? Consider our famous slugfests and ask yourself when was the last time the Academy Awards were so entertaining? And reread my annual Oscar jokes (published right here on Gold Derby) and try to recall any wittier wisecracks on recent Oscar telecasts. We could virtually host on Tom’s New York City sofa, where you’ve seen us brawl before. Best of all – we can battle over predictions right before each award is presented, saying who should get ready to grab the gold (and who can catch that snowball in hell.) At the conclusion of the kudos, the pundit with the lower score gets tossed from the high-rise, right into the Hudson River. The irony of it. The global pandemic could produce the cure for the ailing Oscars.