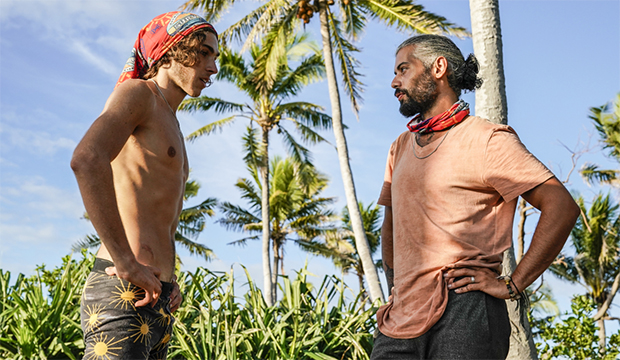 And then there were five. “Survivor 41” began with 18 all-new castaways divided into three tribes, but only the Final 5 remain: Xander Hastings of Yase, Ricard Foye of Ua, and Erika Casupanan, Heather Aldret and Deshawn Radden of Luvu. All season long, Gold Derby readers have been making their predictions for who they think will win, and the racetrack odds slightly favor Ricard in first place. But Erika isn’t too far behind him. Take a look at our last-minute finale predictions ahead of the December 15 episode:

If Ricard ends up as the $1 million winner, he’d be the first hard of hearing person to ever claim victory in 41 seasons. The Washington native is completely deaf in one ear and often has to rely on reading lips, as he explained in the 9th episode. His biggest claim to fame was voting out his closest ally, Shan Smith, before she could do it to him. That put a huge target on Ricard’s back, something he’s so far managed to dodge because he keeps winning immunity challenges.

A victory for either Erika or Heather would make them the first female winner in seven installments, since Sarah Lacina in Season 34. For those keeping track at home, over the past 40 seasons of “Survivor,” men have won 25 times while women have only prevailed 15 times. Between the two of them, Erika seems to have a better relationship with the jury than Heather and can actually brag about making at least one game move — the controversial hourglass smash.

Xander’s savviest moment was tricking faux ally Liana Wallace into wasting her “Knowledge Is Power” advantage, which allowed her to steal an advantage or idol from someone else. He made her think his hidden immunity idol was in his possession, when in reality it was a fake. Xander is also the season’s ultimate underdog, losing all of his fellow Yase members early on and having to play from the bottom to make it into the finale.

After the back-to-back-to-back eliminations of Shan, Liana and Danny McCray, Deshawn is the last remaining member of the all-Black alliance. Does that mean Deshawn will have their jury votes in the end? Not necessarily. Don’t forget, Shan has already promised her winning vote to Ricard, and she publicly called out Deshawn as a “snake” after her elimination. Deshawn later blew up his Final 3 deal with Erika and Xander at tribal council, so he may not have many friends left in the game.