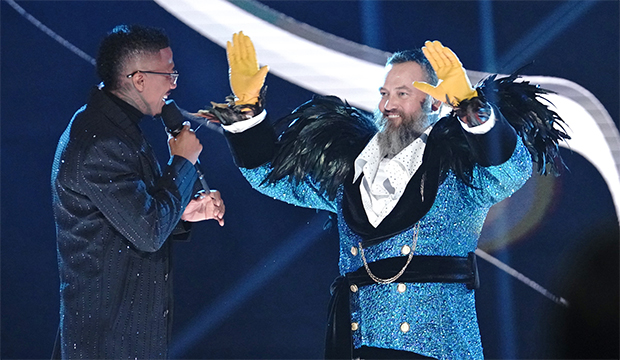 The Group B semi-finals took place on Wednesday night’s episode of “The Masked Singer,” with two performers unmasking before the hour was over. Mallard was the first costumed crooner to reveal himself as “Duck Dynasty” reality TV Star Willie Robertson. His performance of “Fly” by Sugar Ray wasn’t enough to advance the billed bird to the Group B finals.

“I felt comfortable being a mallard,” Willie admitted during his unmasked interview with host Nick Cannon. “When they said duck, I thought, yeah! It was just one of the hardest things I’ve ever done. The first night I thought, there is no way. Most of the people that you named, I’m friends with. So I was laughing a lot because I was like, ‘he’s gonna die when he finds out they thought I was him.’ I was so nervous being in front of you and this has just been a blast. This has been one of the funnest things I’ve ever done.”

Willie stumped panelists Robin Thicke, Jenny McCarthy, Ken Jeong and Nicole Scherzinger. None of them had any clue the TV personality and author was hiding within the Mallard suit. Robin’s first impression guess was Larry the Cable Guy (who turned out to be Baby!) so he went with country singer Alan Jackson instead. Jenny initially said Toby Keith but changed her mind to Jason Aldean. Nicole’s first impression was Dierks Bentley, but she settled on Dog the Bounty Hunter. Ken’s first and last guess was Billy Ray Cyrus.

Mallard was the fourth performer eliminated from Group B and the 11th overall. Willie’s exit was preceded by Dwight Howard as Octopus, Vivica A. Fox as Mother Nature, Toni Braxton as Pufferfish, Tyga as Dalmation, Larry the Cable Guy as Baby, Ruth Pointer as Cupcake, Rob Schneider as Hamster, Honey Boo Boo & Mama June as Beach Ball, Johnny Rotten as Jester and Natasha Bedingfield as Pepper. The contestants advancing to the Group B final are Banana Split and Queen of Hearts. Next week Bull will take on Skunk in the Group A Finals featuring the first ever superstar duets.