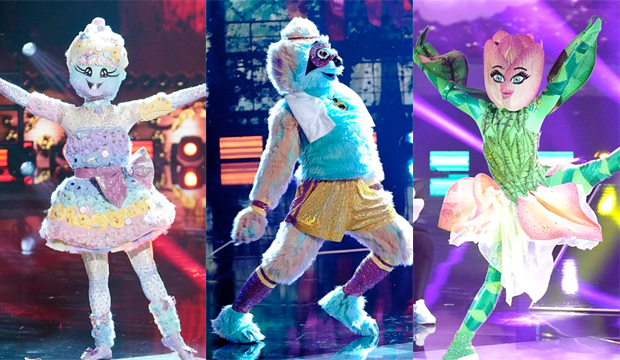 And then there were three. Cotton Candy, Sloth and Tulip have each made it to the finale of “The Masked Dancer” Season 1, which will air in a two-hour block on Wednesday, February 17. These competitors are all clearly talented dancers, but only one has what it takes to go the distance and claim the Diamond Mask trophy. According to our finale predictions, Cotton Candy is the person who fans THINK will win. But who do you WANT to win? Vote in our poll below to tell us who you’re rooting for and then be sure to sound off down in the comments section.

Cotton Candy went viral even before her first appearance thanks to requiring a medic after falling during an aerial stunt. The judges praised the colorful confection for continuing on despite the danger, with Ken Jeong proclaiming, “I think everybody is choked up at your performance and your resilience. This was the most beautiful performance I’ve ever seen on a ‘Masked’ show.” Just this week Paula Abdul referenced Cotton Candy’s fall again when she reminded people how gracefully she dropped to the floor, implying she could be a gymnast.

Sloth is the last man standing on “The Masked Dancer,” and for good reason: he’s enormously entertaining. This big-eyed mammal made the panelists laugh each and every week, suggesting he might be a comedic actor. However, the judges most recently changed their guesses to that of “Dancing with the Stars” pro dancer Chmerkovskiy (either Max or Val, they can’t decide). Has the Sloth done enough to claim victory during next week’s finale showdown?

Tulip’s personal story is one that has really affected viewers at home. “It wasn’t always easy growing up,” Tulip told Paula in her high-pitched voice during the Group A Playoffs. “I was judged a lot and it hurt. But my best bud taught me to use those feelings whenever I compete and put it into my performance.” The pink-petaled contestant took a big risk in the semifinals by dancing to polka in what the panelists realized was one of the most complex routines of the night. Will the risk pay off?

Here’s a closer look at the dances and judges’ guesses for the Final 3 as we approach the Season 1 finale: