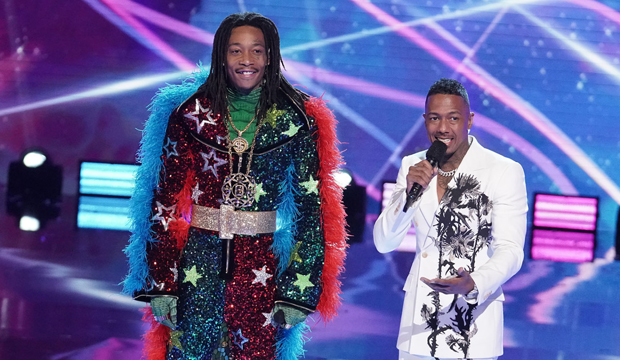 The highly anticipated Season 5 finale of “The Masked Singer” took place on Wednesday night, with Black Swan, Chameleon and Piglet facing off for the Golden Mask trophy. The Chameleon was hoping to become the first rapper to win the Fox reality TV competition, but the hip-hop lizard’s performance of “Gangsta’s Paradise” by Coolio didn’t pull in enough votes. Chameleon finished in third place and was revealed to be Golden Globe and Grammy nominated rapper, Wiz Khalifa.

“He’s probably gonna be a little bit freaked out when he sees the Chameleon,” Wiz said of his son during his unmasked interview with host Nick Cannon. “But yeah, it was for him. I’m a fun dad. I love to enjoy myself. I love to be myself. As much as I can encourage him to be himself and get into his imagination, sing, dance and be as crazy as possible. I’ll be the best example of that for him.”

Panelists Nicole Scherzinger and Robin Thicke each correctly guessed the multi-platinum superstar was hiding behind the mask. Jenny McCarthy thought the Chameleon was Gucci Mane while Ken Jeong felt certain he was 2 Chainz. The panelists were way off the mark with their first impression guesses so no points towards the Golden Ear trophy were scored.

Throughout the season various clue packages were dropping hints about the Chameleon’s true identity. The taxi cab in Chameleon’s package was a clue to Wiz’s first #1 single, “Black & Yellow.” The peaches in his package were a nod to the rapper’s mom, Peachie. He called himself Cham in his packages, a clue to his real name, Cameron, or Cam for short. The “Beware of the Pit” sign was a clue to Wiz’s hometown, Pittsburgh.

“Thank you guys for letting me be here,” were Wiz’s parting words. “I had a great, great time. I’m gonna see you guys again, let’s party!”