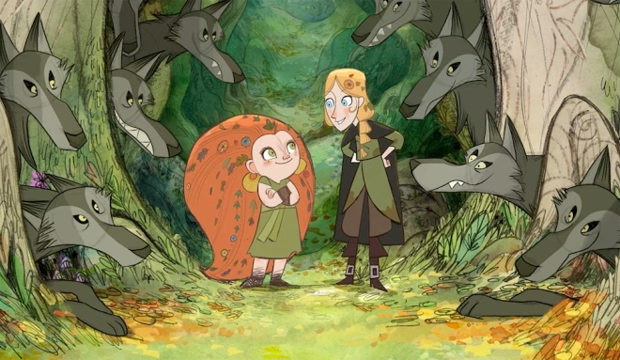 Tomm Moore reaped Oscar bids for his first two animated features: 2009’s “The Secret of the Kells” and 2014’s “Song of the Sea.” He contends again for Best Animated Feature, alongside co-director Ross Stewart, for “Wolfwalkers.”  “Wolfwalkers” began streaming on AppleTV+ last December. Back then, they joined Fionnula Flanagan, the veteran actress who worked with them on “Song of the Sea,” for a Zoom interview about this final chapter in Moore’s Irish folklore trilogy.

The duo was finishing their work on “Song of the Sea” when they began thinking about “Wolfwalkers.” “It’s sad,” said Stewart. “All of the themes became more and more relevant over the six or seven  years we were working [on ‘Wolfwalkers’]. We wanted to speak to the environment. We wanted to speak to species extinction. We wanted to speak to the ripples of colonialism that we’re all still suffering from under rulers who are ruling people by fear and turning them against each other.” Their hope was that “kids could see past these fake boundaries that we put up around ourselves and be able to be friends despite being on two different sides,” said Moore.

The team also wanted to look at the problems “that existed in 1650, as an historical era drama,” noted Stewart. “It became very apparent that we were actually getting a resurgence of the same problems. So, we didn’t learn from our lessons and that history repeats itself, if it can.”

“Robyn stats of thinking she wants to be a wolf hunter and prove to her dad and the Lord protector that she can kill the wolves but ends up learning so much by making friends with Mebh,” Stewart said. “So, she ends up in this double role where she goes from being one of the colonizing to literally becoming a wolf and living with the wolves.  Wolves had an important part in the Irish psyche as a wilderness that we were able to live with.”

But not Cromwell, who invaded Ireland in 1649 on behalf of the England’s Rump Parliament. “When Cromwell came and said, ‘I’m going to offer a reward to wipe out all the wolves,’ he was symbolically taming the country by killing the wolves,” Stewart explained. “By having Robyn become a wolf, she becomes more Irish or more local to where she is by seeing the wolves from their point of view. That changing point of view was so important because I think that’s the only hope we have now.”

“Children,” said Stewart, “don’t have preconceptions, rules and biases that adults do. So, I think it was very important that Robyn would be a little English girl and would make friends with the enemy in the same way that Mebh would have seen all the townies as the enemy. They’re able to reach across the divide and become friends. It’s quite powerful.”

PREDICT the Oscar winners through April 25