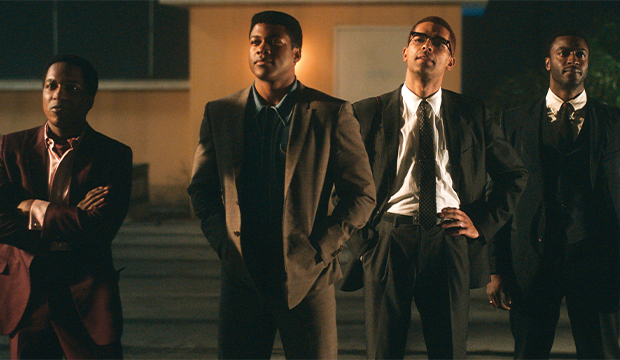 Amazon’s “One Night in Miami” is in the lead to win Best Adapted Screenplay at Sunday’s Writers Guild of America Awards, according to Gold Derby odds. Kemp Powers wrote the film based on his acclaimed play that tells of a fictional evening between Malcolm X, Muhammad Ali, Jim Brown and Sam Cooke. While Ruben Santiago-Hudson‘s adaptation of the August Wilson play “Ma Rainey’s Black Bottom” sits in second place in our WGA odds, it’s fallen slightly since that Oscar snub. Meanwhile, third-place contender “Borat Subsequent Moviefilm” is on the rise at the guild, buoyed by a pair of Oscar bids for Sacha Baron Cohen (adapted screenplay) and Maria Bakalova (supporting actress).

To contend at the WGA, one has to qualify for consideration under the guild’s strict guidelines or those of its international partners. The Writers Guild nominees for Best Adapted Screenplay are “One Night in Miami,” “Ma Rainey’s Black Bottom,” “Borat Subsequent Moviefilm,” “News of the World” and “The White Tiger.” These match three-for-five with the Oscars, where “Ma Rainey” and “News of the World” have been replaced by “Nomadland” and “The Father,” which weren’t eligible at the guild.

Remember, last year Gold Derby’s predictions got this WGA category wrong, as our front-runner “Little Women” lost out to “Jojo Rabbit.” Weeks later, “Jojo Rabbit” matched its guild victory with a triumph at the Academy Awards.

The 2021 WGA Awards in film and television will be presented at a virtual ceremony on March 21, so there’s not much time to make or update your predictions at Gold Derby. Ahead, see our Writers Guild Awards predictions for Best Adapted Screenplay, according to the combined odds of our Experts, Editors and Users.