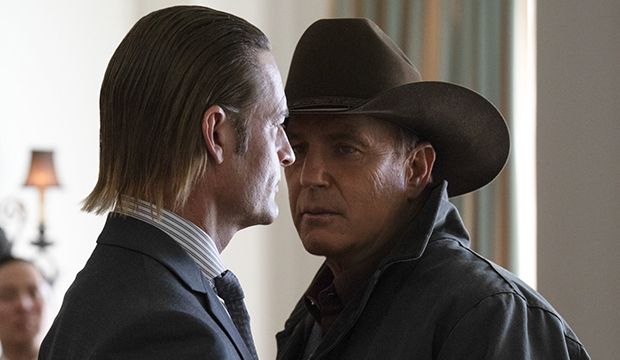 Season 3 of “Yellowstone” ended with not one, not two but three Duttons’ lives hanging in the balance. A bomb exploded in Beth’s (Kelly Reilly) office, gunmen opened fire in Kayce’s (Luke Grimes) office, and John (Kevin Costner) was gunned down on the side of the road while being a good Samaritan — the culmination of the season-long battle between the Duttons and Roarke’s (Josh Holloway) Market Equities over the former’s land. The good news for fans is that Paramount Network renewed “Yellowstone” for a fourth season four months before the third one premiered, so they will definitely get answers, but but might the show go on without one or multiple Duttons?

Well, there is probably zero chance that all three will be dead. After all, the final shot is of a slumped-down John pulling out his phone, which helped him literally dodge a bullet in the chest. He’s not out of the woods, but he is in probably in better shape than his children — Kayce had to take cover behind his desk as he was ambushed, while Beth was mere feet away from a packaged explosive that was being opened by her assistant, who is definitely a goner, when it went off.

Last month, Costner, who’s also an executive producer, played coy when asked if he’s returning for the fourth season — “I can’t say,” he told “Good Day New York” — but Grimes was a tad more forthcoming, confirming to Monsters and Critics that he’s been filming the new season and teasing what’s ahead for Kayce’s complicated relationship with his father. “Obviously, Kayce and John have a strained relationship when you first meet them. And as the series unfolds, you figure out more and more why that is. I think in the last couple of seasons, and even into the upcoming Season 4, there’s always a pattern of them mending that, seeing eye-to-eye, and figuring each other out,” he shared.

Beth seems the least likely to survive since her office got blown up so badly that there were multiple car wrecks outside, but stranger things have happened on TV. Last month, Reilly stayed mum about Beth’s fate in an interview with Esquire. “As an actor, especially one that’s been put through hell and back with a character like Beth, I was like, ‘What’s the endgame?'” she said. “And there’s a big cliff-hanger obviously at the end of Season 3. Obviously I can’t tell you whether or not Beth makes it another day, to see if she finds that peace that you talk about. But it’s an interesting question with any character. Is happiness something that is an ultimate end goal?”

Season 4, which is filming in a Montana bubble, is expected to premiere in the summer.