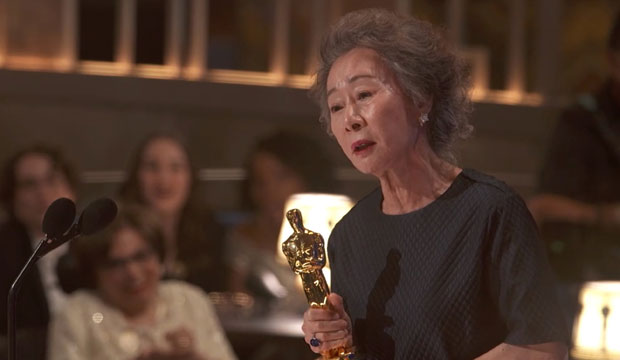 After an insane, unpredictable and incredibly long season, the 93rd Academy Awards are finally behind us! Considering how awards ceremonies have been mostly held remotely since last year’s Oscars due to the COVID-19 pandemic, I think we were all plenty grateful that we got winners accepting their awards in-person. But like every year, there were some speeches that stood out as being particularly memorable. Some, like Mia Neal, paid tribute to the shattering of a glass ceiling, and others were filled with emotion from great tragedy like Thomas Vinterberg. With that in mind, here are the six best speeches from this year’s telecast. Do you agree with our picks? Let us know in the comments below.

Having swept every precursor award, Zhao was probably more shocked about the category’s placement during the first hour of the ceremony than her actual victory. In becoming only the second woman to win the Oscar for directing, Zhao reminisced about how she persevered when things got hard and remembered a Chinese poem she used to recite with her father. The first phrase of the poem translates to, “People at birth are inherently good.”

Youn has endeared herself to almost everyone with her speeches this year, and her Oscar acceptance did not disappoint. The award was presented by Brad Pitt (an executive producer of “Minari”), so she started her speech by asking, “Mr. Brad Pitt, finally. Nice to meet you. Where were you while we were filming in Tulsa?” She also forgave Westerners in the audience in case they’ve mispronounced her name.

After thanking her cast mates and writer/director Lee Isaac Chung, she explained that she doesn’t really believe in competition: “How can I win over Glenn Close? I’ve been watching her so many performances. Tonight … I have just a little bit of luck, I think. Maybe I’m luckier than you.” She also thanked her two sons, who “made me go out and work. Beloved sons, this is the result because mommy works so hard.”

Fennell set the tone for the evening since her category was presented first. She was shocked and claimed that the only speech she had ever written for this occasion was when she was 10 and most of the thank-yous were for Zack Morris from “Saved by the Bell,” who was her supportive husband.

Trying not to cry, “which is very difficult as an English person,” she also thanked her crew, including a special shout-out to the film’s star and executive producer, Carey Mulligan, “for being not only the most talented person in the world, but the kindest and funniest.” She closed her speech by talking about her son, “who did not arrive until a couple of weeks after shooting. Thank God because I was crossing my legs the whole way through.”

SEE93rd Oscars ceremony review: A non-traditional event that worked on almost every level

The Danish director started his remarks by saying that this was a moment he had always imagined: “Since I was five or something, I’ve been preparing speeches in train stations, at school, in the toilet. And here I am.” He gave a special thanks to Cinetic “for showing the bravery of investing in a movie that is about four depraved, white, drunk men, basically, who teach children to drink as well,” and then he praised the movie’s star Mads Mikkelsen.

Then came the most difficult and emotional moment: he paid tribute to his daughter, Ida, who had been killed in a car accident four days into the film’s production. She had been excited about the script and was actually going to appear in the movie, so Vinterberg said, “If anyone dares to believe that she’s here with us somehow, you’ll be able to see her clapping and cheering with us.” He closed by calling out her name and saying, “This is a miracle that just happened. And you’re a part of this miracle. Maybe you’ve been pulling some strings somewhere, I don’t know. But this one is for you.”

Neal spoke for the team, which also included Sergio Lopez-Rivera and Jamika Wilson, with Neal and Wilson becoming the first Black winners in the history of the category. Neal paid tribute to her grandfather, one of the original Tuskegee Airmen, who graduated from Northwestern when Black studennts couldn’t stay on campus and tried to become a teacher in an area where Black teachers weren’t hired in the school system.

Neal then acknowledged the historic nature of her and Wilson’s win and the excitement she felt about what was possible in the future: “I can picture Black trans women standing up here, and Asian sisters, and our Latino sisters, and indigenous women. And I know that one day it won’t be unusual or groundbreaking. It will just be normal.”

Upon accepting the award for his short film about a young Black man who gets stuck in a time loop where he has to relive a deadly encounter with a police officer, Free talked about how the police kill an average of three people per day and how those people are disproportionately Black. He then referenced James Baldwin by saying, “The most despicable thing a person can be is indifferent to other people’s pain. And so I just ask that you please not be indifferent. Please, don’t be indifferent to our pain.”

Roe then gave some quick thank-yous in an enthusiastic tone to several individuals who helped the film get made including Netflix, Lawrence Bender, Sean Combs and the film’s its star, Joey Bada$$.