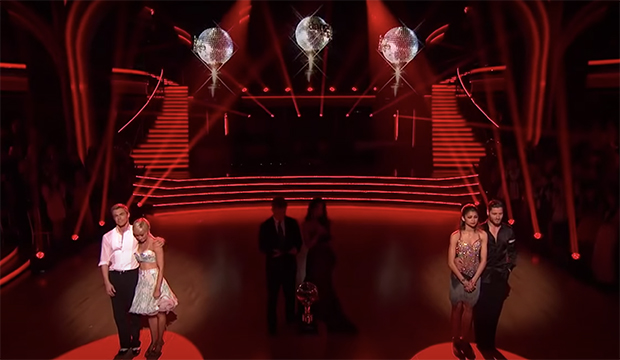 In another multiverse, Zendaya could be going for a MEGOT right now. You know what the last four letters stand for. The “M,” you ask? That’s for Mirrorball, of course. Long before she became the youngest Best Drama Actress Emmy winner with “Euphoria” and entered the current Best Actress Oscar race with “Malcolm & Marie,” Zendaya nearly won the 16th season of “Dancing with the Stars” with Val Chmerkovskiy, finishing second to Kellie Pickler and Derek Hough.

Season 16 aired in spring 2013, and to give you a sense of how long ago that was/make you wither into dust, that was the last season to have a results show and Brooke Burke was still Tom Bergeron‘s co-host. At the time, 16-year-old Zendaya was on Disney Channel’s “Shake It Up” and became the youngest “Dancing” contestant to date, eclipsing then-17-year-old Shawn Johnson, the Season 8 champ (Willow Shields, then 14, broke this record in Season 20).

Zendaya was hot on the hardwood right out of the gate, topping the leaderboard the first three weeks; she had or shared the highest score for six of the 10 weeks of competition. Needless to say, a lot of people expected her to win. She actually had a literal point advantage in the finale as well, nabbing 65 points to Pickler’s 64 on the first night and then 95 to 94 on the second. But Pickler made up that minute margin through fan votes to pocket the Mirrorball trophy, which was Hough’s fourth of a record six wins.

Ask any “Dancing” fan and they’ll all agree that Zendaya lost it on the freestyle, the make-or-break routine for many frontrunners and underdogs. Zendaya and Chmerkovskiy performed a fun amalgamation of cha-cha, contemporary and hip-hop that she could’ve done in her sleep, while Pickler and Hough stole the show with a poignant contemporary number, even scoring the encore slot on the results show.

No shade. Chmerkovskiy himself agrees. In 2018, the pro admitted he “dropped the ball a little bit,” and that the loss was his “biggest heartbreak” on the series. “I wish I could go back and have another chance at that season,” he said. “My biggest heartbreak was on ‘Dancing with the Stars,’ not winning with Zendaya, honestly. That was a huge heartbreak for me because she was 16. I wanted this to be such a huge moment for her. She worked so hard, and I really wanted her to lift that trophy and jump-start her career. And she didn’t lift the trophy and I felt heartbroken about that.”

Our readers were also very much not over the result — a whopping 70 percent said in a poll that Zendaya should’ve won that season. But as Chmerkovskiy, who later won with Rumer Willis and Laurie Hernandez, noted three years ago, the show “jump-started her career anyway.” Zendaya went on to release an album, star in and produce “K.C. Undercover,” hit the big screen in the “Spider-Man” franchise and “The Greatest Showman” (2017), and become Meechee before going to the next level with “Euphoria.”

After her Emmy victory in September, Chmerkovskiy posted a lengthy tribute to the 24-year-old on Instagram in which he reminisced on their “Dancing” days and shared that he told her she will win an Oscar one day.

“Devastated by the loss I remember telling her that one day you’ll be winning an Oscar and part of the reason why will be this feeling of defeat you feel right now,” he wrote. “A few L’s will teach you lifelong lessons you’ll turn into dubs real soon. It was definitely not said this eloquently nor sound remotely as cool, and it isn’t an Oscar yet, but I always knew you were special. Our season on ‘DWTS,’ and now your continued success since has brought me ridiculous amount of joy. I’m so proud of you Z! Youngest ever winner of an Emmy for a leading role. You’re a superstar, and always have been! Love you fam to many more wins in your life.”