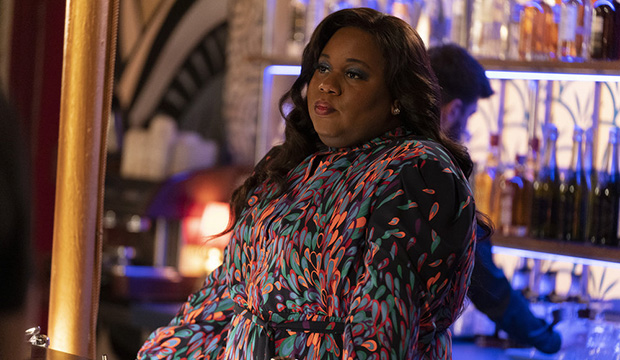 Alex Newell has been a stealthy scene-stealer since the beginning of “Zoey’s Extraordinary Playlist.” As Zoey’s landlord-turned-best friend Mo, Newell turns in a confident performance every week, becoming more than just the stock best friend role. Season 2 gave the actor more opportunities to flesh out his character — Mo became the co-owner of a new restaurant and entered a new relationship with a hunky fire inspector. Now, Newell is in the hunt to score an Emmy nomination, sitting in sixth place in Gold Derby’s combined Best Comedy Supporting Actor odds. Here are four reasons why Newell will secure the nomination.

Seven of last year’s eight nominees for Best Comedy Supporting Actor are ineligible, which means we’ll be seeing some major turnover. Without Emmy juggernauts like “Schitt’s Creek” and “The Marvelous Mrs. Maisel” in competition this year, actors like Newell have a much better chance of nabbing one of the eight slots. This means voters will have to dig deeper to find worthy nominees and if they check out “Zoey’s,” Newell is a natural standout.

If Emmy voters are truly at a loss in this category, the Critics Choice Awards could be a helpful guide to narrow down more than 100 contenders. Though there is no voter crossover between the two groups, Critics Choice nominated Newell earlier this year while not even finding room for series star Jane Levy, suggesting there is real passion for his performance.

3. The Emmys love quippy LGBTQ+ characters in this category

Mo lives confidently as a gender-fluid person, but the writers do not limit Mo’s story to identity. We see Mo explore their professional career and love life while never being afraid to lay down some truths to whoever needs them. Emmy voters have taken to actors playing similarly vivacious, queer characters in Best Comedy Supporting Actor, like Sean Hayes (“Will & Grace”), Eric Stonestreet (“Modern Family”), Tituss Burgess (“Unbreakable Kimmy Schmidt”) and last year’s winner, Dan Levy (“Schitt’s Creek”). All but Burgess won.

Newell is pure effervescence on “Zoey’s,” managing to even stand out on a show in which people break into song and dance, but he wouldn’t just be any old Emmy nominee. Newell would be the first gender-nonconforming actor to earn an Emmy nomination for acting, a big step forward following Laverne Cox making similar history for trans performers in 2014. As society gradually becomes more accepting of those across the gender identity spectrum, it would be a positive sign if voters nominated Newell, especially for a character whose storyline is not wholly focused on their identity.