Season 2 of “Zoey’s Extraordinary Playlist,” which premiered Jan. 5, might not be eligible for the upcoming Golden Globes, but it might just be a contributing factor in the series landing nominations for its first season. Season 1 of NBC’s musical comedy series aired from January to May 2020, which means it will compete at this year’s Golden Globes, where it stands a strong chance of landing some bids. The visibility of NBC airing the second season right now may give “Zoey’s” a boost in awareness among members of the Hollywood Foreign Press Association.

With the Golden Globes scheduled to air Feb. 28 instead of its usual early January weekend, “Zoey’s Extraordinary Playlist” is in a unique position for that particular awards show, but it is one that is quite familiar for shows competing at the Emmys. There are numerous examples of series airing new seasons while simultaneously being eligible and honored at the Emmys for the previous one. “Succession” is one such case, winning the Emmy for Best Drama Writing for its first season at the same time the highly buzzed Season 2 was airing. “Orange Is the New Black” is another show that benefited from this release strategy, with each new season dropping in the middle of Emmy voting for its previous installment every summer.

“Zoey’s” is on the brink of breaking into multiple categories at the Golden Globes, according to the latest Gold Derby odds. The series is in ninth place for a Best Comedy/Musical Series nomination and sixth place for star Jane Levy in Best TV Comedy/Musical Actress. Its competition includes shows like “Dead to Me” and “What We Do in the Shadows” that last aired in the spring of 2020, which, after everything the world has been through since, feels like an eternity ago, and unlike “Zoey’s,” none of these top contenders are currently on the air to be top of mind. The closest case is “The Flight Attendant,” whose first season ended last month on HBO Max.

The Globes love to reward shows that are relevant in the here and now, and with “Zoey’s” being one of  contenders airing new episodes right now, don’t expect the musical series to fall flat with HFPA voters. 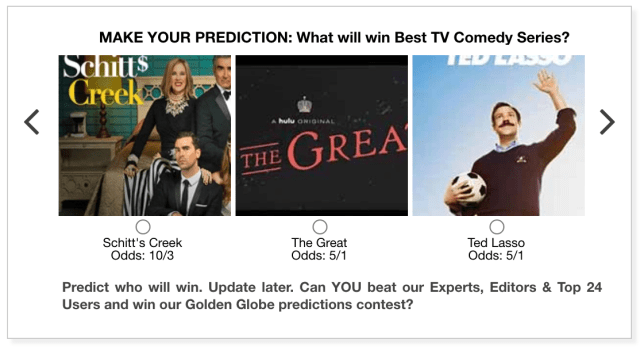