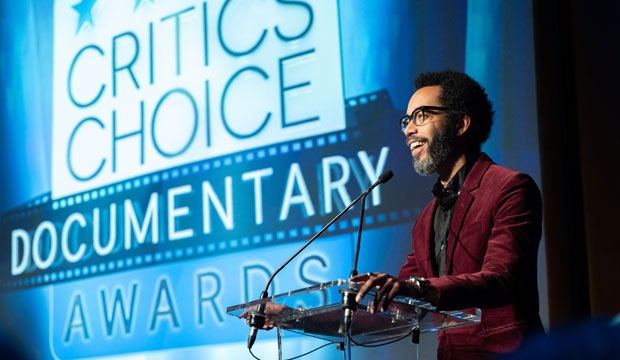 “Good Night Oppy” lived up to its name. The space doc about rovers on Mars took the top honors at the 7th Annual Critics Choice Awards in midtown Manhattan. The move from Brooklyn (where the show had been produced for the last six years) was an upgrade. “Take a look around the Edison Ballroom,” ‘Oppy’ filmmaker Ryan White said. “It was a theater for over 60 years and did ‘Oh Calcutta’ for 13 years. Totally nude with sex-related sketches written by Sam Shepard, Samuel Beckett, Jules Feiffer and John Lennon.” Okay, yes, this place in the Edison Hotel is cooler.

Comic Wyatt Cenac hosted. “Keep making good stuff,” he told the audience. “So next year we don’t have to turn this thing into an awards show for TikTok explainer videos.” The star power was amped up for the new digs. Paul Shaeffer gave “The Beatles: Get Back” its Best Musical Doc award. He talked about LPs and then offered to meet with anyone later who wanted to know “what those are.” Tamara Tunie, Idina Menzel, okay. But Kathy Ireland?

“This year she ventured into the documentary space with ‘Anxious Nation,’ which explores why we are in an anxiety epidemic,” Cenac explains to the crowd, before introducing Ireland as a “supermodel turned super mogul.” She has a record label. Who knew? And a branding business that generated sales of $3.1 billion last year. Hey, maybe she can buy Netflix. Or part of Twitter. Backstage she tells me docs got important during the pandemic. “People are hungry for real stories,” she says. “Our film has an Academy Award-winning director, Vanessa Ross, and a deep dive into countless lives. It’s compelling to people.” Okay, the film lost but Ireland has the doc bug. “Documentaries are just more fulfilling time for the viewer.”

Cenac tells me why we’re drawn to documentaries is such a good question “someone should make a documentary about that.” He’s funny. “There’s always been an interest in documentaries, but in the last few years, there’s been more energy. Cable channels, streaming networks, all making sure people know about these films. Ken Burns never stops and PBS has always put that energy behind him. Now it’s everywhere. It’s about time.” He says a whole show honoring docs is long overdue. “It’s such a challenge to compare a sports documentary to a historical documentary to someone’s personal journey, so it’s nice.” He liked ‘Fire of Love,’ which won Best Archival Doc and came in second overall. “Two people who love each other throw themselves into volcanoes.”

The D.A. Pennebaker Award isn’t handed out every year. His wife and longtime partner Chris Hegedus tells us, “Penny would be very proud they’re giving it to Barbara Kopple” this year. “Penny absolutely adored her,” she says. In fact, if this collection of artists has a guru or leader, it’s Kopple. Recipient after recipient winning in various categories mention her. She waves, smiles, blows kisses. After a film tribute that includes her Oscar winners “Harlan County, USA” and “American Dream” she reminds the room, “There was a time when critics wouldn’t even look at documentaries.” She says making them is “never easy, there are always obstacles.” But doc makers, more than any other group, help one another. “It’s a community, we open doors for each other.” Applause all around. She remembers Pennebaker as the one who helped launch her career with an Alice Tully Hall showing of “Harlan.” “He was rooting for me all the time.”

The Edison Ballroom balcony cocktail reception is shoulder-to-shoulder. Neil Rosen is looking for the director of “The Automat,” Lisa Hurwitz. Wilson Morales is handicapping his favorites. Bill Diehl is proud of his wife, Lorraine, who was a talking head in “Automat.” Mike Sargent waves. He’s surrounded by doc filmmakers, a “docket” I dub them. Thirty years ago I interviewed David Bowie in a spot five feet away. No one seems impressed with that. Including the director of the show. So I stop telling the story.

Seven years in, the CCA Doc Awards have grown up, moved to the city from the hipper but cramped BAM in Brooklyn, and become a night everyone looks forward to. At least in this room. “Documentaries are powerful,” Cenac reminds us. “They can do great things. Unless you’re Kyrie Irving.”

The event was live streamed for the first time this year at CriticsChoice.com. If you go there to watch. listen carefully to the announcer. He’s really good.

Yes, Bill McCuddy was the voice-over for the seventh year. He is a frequent contributor and cohosts “Sitting Around Talking Movies” with Neil Rosen as well as “The Accutron Show” and “Talking Pictures” on PBS/AllArts.