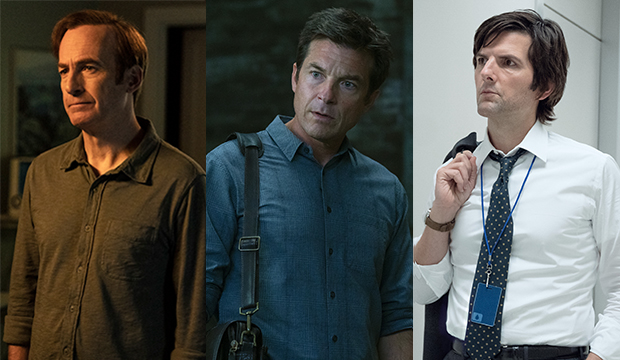 Welcome to Emmy Experts Typing, a weekly column in which Gold Derby editors and Experts Joyce Eng and Christopher Rosen discuss the Emmy race — via Slack, of course. This week, we discuss Best Drama Actor and if we’re underestimating any of the bottom three contenders.

Christopher Rosen: Hello, Joyce! We’re back at it again and typing this week about Best Drama Actor. This has become the most competitive race of Emmys season, at least according to our odds. Fewer than a hundred votes separate Brian Cox and Lee Jung-jae in our combined odds with Jeremy Strong hanging tough in third place. This seems like it could be a repeat of the Screen Actors Guild Awards or Critics Choice Awards, where the two “Succession” actors likely split the vote just enough to get the “Squid Game” star a trophy. But I wonder if there’s a fourth option here who could emerge: “Better Call Saul” is racing toward its finale on Aug. 15, just days after final Emmy voting actually starts, and is all but assured of providing Bob Odenkirk with a huge boost. Odenkirk feels ascendant because it can qualify as the top choice with any number narratives. He’s a sentimental pick who also delivers a knockout performance who also has years of superlative work under his belt who is also peaking at the right time. It’s true, the Television Academy has never warmed to “Better Call Saul” even a little. But with the stellar “Succession” season so far out of mind, and “Squid Game” mania seemingly having peaked, is there room for Gene Takovic to sneak up on all these guys and pull off the upset? Joyce, you’re the “Saul” stan among us, can you imagine this scenario playing out or is this like me doing math: very stupid?

joyceeng: I would love to stock up on the Cinnabon for a huge Emmy night celebration, but I have Odenkirk in fourth right now — though he’s first in my heart. Based on the errors of the TV academy’s ways (“Better Call Saul” is 0-39 with seven more noms this year), I’ve been mentally prepared for years for Odenkirk to never win for playing Jimmy McGill/Saul Goodman/Gene Takovic. It never really bothered me that he was not nominated for “Breaking Bad,” even though he was great on that, but he should have at least one Emmy at home for “Better Call Saul.” However, of the bottom three, he might have the best case for an upset. Emmy voters are not super sentimental, but there was a tremendous outpouring of love for him from fans and industry folks alike last July when he “briefly flirted with ‘quietus,’” as he put it — really, the only time in history Twitter wasn’t a hellscape — and, like you’ve noted, “Better Call Saul” is airing its final episodes right now. Since it’s entered the “Breaking Bad” era, Odenkirk has had two spectacular showcases: the black-and-white Gene installment “Nippy” and this week’s “Breaking Bad.” All the buzz was around Bryan Cranston’s and Aaron Paul’s reprisals (and 42-year-old Aaron Paul doing this), but it was a devastating hour documenting, in parallel past and present storylines, how Saul is his own worst enemy and can’t stop going down bad choice roads. But is the acting branch even watching? ¯\_(ツ)_/¯ What about the other two apparent also-rans? Jason Bateman is an Emmy winner for directing (where he’s nominated again) but has never won for acting, while Adam Scott finally scored that “welcome to the club” nom, but is it exactly just that?

Christopher Rosen: I feel like I’d be able to make a better case for Bateman were Odenkirk not there. Like you said, Bateman is already an Emmy winner, so I don’t think there’s a big collective need to get him a win for Best Drama Actor — and I’m not sure the final season of “Ozark” was memorable enough for him to pull off the victory, regardless of his customary strong work. Scott does feel like a classic “we see you” nomination. I don’t think he can win — I have him in last, even though I love that performance. But the nomination is its own reward and who knows what might happen with “Severance” Season 2. Let’s pivot here to the real race: Cox versus Lee versus Strong. Joyce, I come for you with love… for Logan Roy. I’ve said for months that Cox should win for “Succession” Season 3, a tour-de-force for the veteran actor that ranks among the best Difficult Men performances of the modern era. I’m talking James Gandolfini in “Whitecaps” or Jon Hamm in “The Wheel,” but spread across the entire season. Cox’s submission episode (which doesn’t matter, I know) is “All the Bells Say” and that means he would win an Emmy for his Shiv impression, which yes. That should happen. But here’s where I’m stuck: I’m picking Cox with my heart, but my head says that the vote-split is probably real and there will be just as many Conheads pulling for little lord Strong — meaning Lee wins for “Squid Game,” a win that will also serve as a way for the Television Academy to honor the blockbuster Netflix series (since it probably won’t win in Best Drama Series). How do you see this three-headed monster fighting itself out?

joyceeng: If they play clips during the ceremony, Cox’s should obviously be his Shiv impression. Hall of Fame stuff. While I do have Cox in first at the moment, it’s really more of a hopediction. Lee is the most logical and safest choice, but I am contemplating returning to the Number One Boy himself, Jeremy Strong. There has not been a repeat winner in this category under this system yet, but several of these people won for their final seasons, and of the ones that didn’t — Rami Malek, Sterling K. Brown and Billy Porter are the others – Strong’s repeat chances feel the, uh, strongest (Malek was never even nominated again). “Succession” is a (full f—ing) beast now, and Strong’s performance is as equally towering as Cox’s but in a completely different way. Cox has also not beaten Strong head to head anywhere, but the reverse has happened multiple times. That’s not to say it can never happen. But are we just letting our “Succession” stan cards show and this will be an easy victory for Lee? I will say that SAG doesn’t always translate to Emmy glory here. Just ask two-time SAG winner Jason Bateman.

Christopher Rosen: We might be, but I direct naysayers to Logan himself: He effing wins.

joyceeng: He does, but I can’t help but think this is like 2020 redux. A whole lotta people had Cox in front then, especially at the beginning of the season, when it was clear to anyone watching and paying attention to “Succession” that Strong was the standout that season and had the momentum. To be fair, that is not as clear-cut this year and there is an obvious alternate in the mix. In any event, I’ll have this ready to go on Sept. 12: