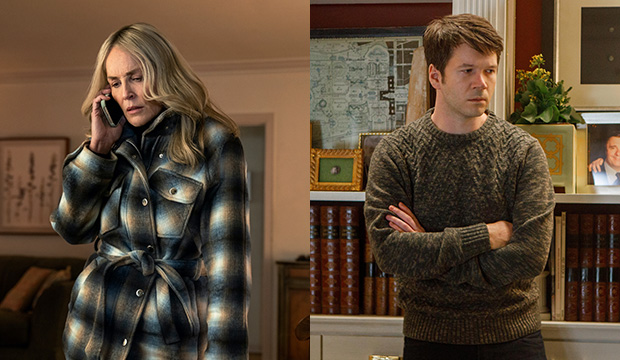 Welcome to Emmy Experts Typing, a weekly column in which Gold Derby editors and Experts Joyce Eng and Christopher Rosen discuss the Emmy race — via Slack, of course. This week, be our guest as we tackle the guest categories.

Christopher Rosen: Hello, Joyce! If it’s a day that ends in the letter “y,” you can be sure I’m going to be here stumping for “Stranger Things” at the 2022 Emmys. Today, the final two episodes of Season 4 have arrived — no spoilers please, I haven’t watched it yet! — but we remain focused on the first volume of episodes when it comes to award consideration. And since we’re really typing about guest actors today, “Stranger Things” isn’t really a factor. Robert Englund, Freddy Krueger himself, sits in 14th place in the Best Guest Actor in a Drama category, somehow just behind Justin Kirk for “Succession” who should be an absolute lock but isn’t, according to our odds. Instead, the actor category is dominated by *other* “Succession” stars: James Cromwell, Adrien Brody (pause here to note that I interviewed him and will predict him to win) and Alexander Skarsgard. “Succession” also rates well in the guest actress category, with Harriet Walter out front, Hope Davis sitting in third place, and Sanaa Lathan in sixth. Drama has some drama, but we need to talk about comedy too: Sharon Stone, the queen of ’90s Oscarcasts and one of the most underrated actresses of our lives, is in eighth place for her knockout (slapout?) performance on “The Flight Attendant.” I have Stone winning, obviously. What gives here? What do you make of these categories?

joyceeng: Sharon Stone’s slap is the one we ought to be talking about at an awards show, wbk. I have her in and she has the material to win if voters pay attention (and we know they don’t always, especially in guest). Some people are peeved that her material is largely dramatic, but may I remind everyone that the category is officially called Outstanding Guest Actress in a Comedy Series, not Outstanding Comedic Guest Actress, and Sharon Stone was indeed an outstanding guest actress in comedy series contender “The Flight Attendant.” That being said, I have Jane Lynch in first for “Only Murders in the Building,” which launched its second season just as voting ended like ships passing in the night. I’m not wholly sold on her, but there are also so many “Hacks” ladies in the mix that they could split the vote if multiple get in and there’s no consensus. There’s also Tracey Ullman, who was hilarious on “Curb Your Enthusiasm,” and Walter, who could score guest bids in both categories if she lands for “Ted Lasso” here. The good news for all of them is that two-time defending champ Maya Rudolph is AWOL and this is arguably the least competitive “Saturday Night Live” has been win-wise in a while. Kirk should absolutely be a locked nominee in drama guest actor, though I guess I can’t really say anything since I’m not predicting him. But that’s only because I already have three “Succession” guys in. Should I just pop open a Coke and back Jeryd Mencken?

SEE Emmy Experts Typing: Will ‘Only Murders in the Building’ make a killing?

Christopher Rosen: Choosing one of those “Succession” fellas is no easy task. I could make the case that every actor is the best of the crop — and I assume Kirk is the lowest at the moment simply because he lacks the name recognition of the others (never forget “Weeds,” folks). You mentioned Lynch being in first for “Murders,” but I have a hopediction from that show in first on the male actor side: James Caverly. Was there a better episode this year than “The Boy from 6B”? I mean on any show? With the inventive nature of the production and Caverly’s performance, it was clearly the standout of what has become a popular series. It seems like he should be a lock to get in despite his lower profile. He sits in eighth place right now. Do you think our odds have it wrong?

joyceeng: Caverly would be a great nominee, but his current standing is not surprising. He’s not a big name and is competing in a category with an excess of “SNL” options. We can easily have four “SNL” nominees here for the second year in a row, leaving just two spots for non-“SNL” dudes. I think Caverly’s dips dad Nathan Lane is in and can see multiple permutations for the other five spots. I’ll tell you who I desperately want to get in but am not gonna hopedict him (yet): Robert Ray Wisdom for my beloved “Barry.” He’s absolutely chilling in his one-on-one with Henry Winkler in “starting now” and is the focus of the haunting, total gut punch final shot of the season. Is there any long shot whose inclusion would make you giddy?

SEE Emmy Experts slugfest: Who can surprise in the unsettled limited acting categories?

Christopher Rosen: I don’t know if she’s a long shot, because I think sharp players have her in, but Harriet Sansom Harris blew me away on “Hacks” and I think she could easily win. But she’s not even in the top 10 right now in our odds. She’s become a cult fave over the last few years thanks to her association with Paul Thomas Anderson — and I think the thing I liked most about her guest turn on “Hacks” is that she didn’t go big and broad like she has for PTA. I’ll end there but have the last word here before we come back next week with our final picks!

joyceeng: HSH was the best guest actress on “Hacks” this season. No offense to Laurie Metcalf, who is a hoot as Weed and is understandably the most predicted of the six, but Harris lent so much depth to Susan precisely because she played it straight (similar to her fellow “Hacks” guest contender Devon Sawa when he romanced Jean Smart). Another example of being an outstanding guest actress in a comedy series as opposed to an outstanding comedic guest actress. I’ll close by giving a shout-out to someone who was inexcusably not submitted and should’ve been: Tom Allen, aka Mitch the beignet guy on “Barry,” whose stoned, calming pearls of wisdom we need more than ever now. “Beignets by Mitch” spin-off when?