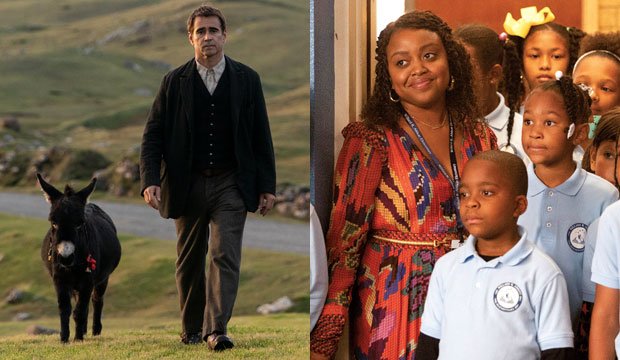 Who came out on top on Golden Globes nominations morning on Monday, December 12? Check out the complete list of nominations here.

“Everything Everywhere All at Once” followed close behind with six noms. It joins “Banshees” in the Best Film Comedy/Musical race. The interdimensional action comedy also scored noms for lead Michelle Yeoh, supporting performers Ke Huy Quan and Jamie Lee Curtis, Best Director, and Best Screenplay. Rounding out the Best Film Comedy/Musical lineup were “Babylon,” “Glass Onion,” and “Triangle of Sadness.”

The top dramatic film was “The Fabelmans” with five bids. It’s up for Best Film Drama along with “Avatar: The Way of Water,” “Elvis,” “TAR,” and “Top Gun: Maverick.”

SEEWhy ‘Outlander’ was not nominated at 2023 Golden Globes

The top drama, “The Crown,” has four nominations including Best Drama Series, where it faces “Better Call Saul,” “House of the Dragon,” “Ozark,” and “Severance.” And three limited series are tied with four bids apiece: “Monster: The Jeffrey Dahmer Story,” “Pam and Tommy,” and “The White Lotus: Sicily.” They’re up for Best TV Movie/Limited Series alongside “Black Bird” and “The Dropout.”

The Golden Globe Awards are presented by the Hollywood Foreign Press Association, a small and insular group of international entertainment journalists. The group has come under fire over the years, with accusations of bribery and glad-handing, and eventually the straw that seemed to break the camel’s back, the revelation that the HFPA, which at the time had 87 members, didn’t include a single Black journalist.

The organization addressed this problem by adding 21 new members, and supplementing that with another 103 international non-member voters recruited from industry and journalism professionals around the world. That group’s composition was 22.3% Latinx, 13.6% Black, 11.7% Asian, 10.7% Middle Eastern, and 41.7% white, according to a statement issued by the HFPA. Will that repair the organization’s reputation? It was enough to get them back on the air, at least. NBC will broadcast the ceremony on January 10, 2023, after dropping the Globes from the airwaves in 2022.

The HFPA doesn’t have any connection to the motion picture academy that decides the Academy Awards, but they’re nevertheless considered a significant stop on the Oscar campaign trail. The well-known, highly publicized, and televised event is an opportunity to raise the profile of films and performers up for consideration at a time when other awards groups are deciding their nominees and winners. And for television programs, they’re an opportunity for new shows to get on viewers and awards-voters’ radars: the HFPA has often shown a preference for fresh faces over returning favorites.

Who do you think will win? Join the discussion on this and more with your fellow movie and TV fans here in our forums.