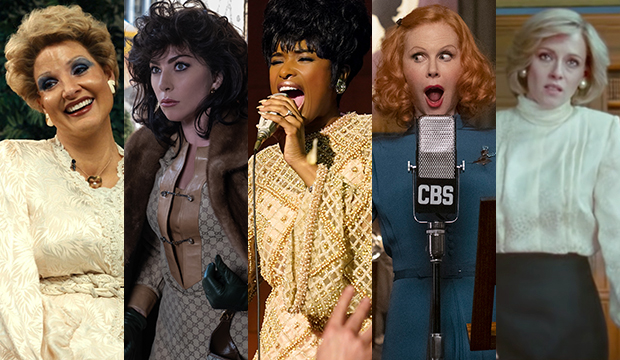 Most of this year’s top Best Actress contenders play real-life figures, with so few fictional characters in the mix that they should consider renaming the category Best Actress in a Biopic. Potential Oscar nominees who earned love from the Screen Actors Guild Awards on Wednesday are Jessica Chastain as Tammy Faye Bakker in “The Eyes of Tammy Faye,” Lady Gaga as Patrizia Reggiani in “House of Gucci,” Jennifer Hudson as Aretha Franklin in “Respect” and Nicole Kidman as Lucille Ball in “Being the Ricardos.” The SAG Awards lineup does not including the surprise snub, Kristen Stewart as Princess Diana in “Spencer.” Will the academy follow suit and make this the most biopic-heavy Best Actress field of all time?

Biopics have long been a favorite of the Oscars, especially in the acting categories. Best Actress, in particular, has had at least one nominee playing a real person every year since 2012, with some categories boasting up to three. Looking back through Oscar history, only one year has had four Best Actress nominees playing characters based on a true story: 2010, when Sandra Bullock won for playing Leigh Anne Tuohy in “The Blind Side” (2009). Flash-forward 12 years later and there is a possibility that the entire Best Actress lineup is comprised of stars playing very recognizable public figures.

However, Olivia Colman in “The Lost Daughter” will likely put a stop to that. Her performance as Leda is the lone representative for fictional characters in this year’s SAG Awards category, and Colman has been recognized by so many other awards groups that she is likely in at the Oscars. The question is, how many of those biopic performances will make it alongside her? Based on her “Being the Ricardos” co-star Javier Bardem also getting a SAG citation, Kidman, now a 15-time SAG Awards nominee, has clear support from her fellow actors and will surely take up one slot. Gaga helped carry “House of Gucci” to become the most successful adult-oriented drama at the box office this year, with the film also scoring two other SAG bids. Chastain is completely transformative in “The Eyes of Tammy Faye” and has done well with critics groups. Hudson hasn’t done quite as well with precursor nominations, but the academy especially loves a biopic about a musician.

And then there’s Stewart, long thought to be the frontrunner in Best Actress, who missed out on a SAG nomination. This indicates a lack of industry support and may put her more on the bubble than anyone would have thought going into SAG nominations day. Yet, she has cleaned up with regional critics awards and gives a mostly transformative performance herself. Regardless of whether Stewart makes it in, we are likely looking at a Best Actress category dominated by biopics. It is possible, though, that the academy could still go in a wildly different direction and make room for other fictional characters to join Colman’s Leda, such as Penélope Cruz as Janis in “Parallel Mothers,” Alana Haim as Alana in “Licorice Pizza” or Rachel Zegler as Maria in “West Side Story.”