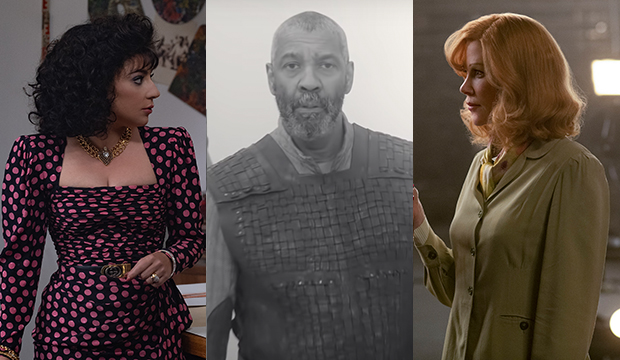 Welcome to Oscar Experts Typing, a weekly column in which Gold Derby editors and Experts Joyce Eng and Christopher Rosen discuss the Oscar race — via Slack, of course. This week, we try to round out our Best Picture lineups.

Christopher Rosen: Hello, Joyce! We’re at a calm before the approaching storm: next week brings nominations for the Producers Guild Awards, Directors Guild Awards, and the opening of Oscar nominations voting. So let’s use our typing fingers to discuss the biggest race of all, Best Picture. We haven’t really touched on the category in a while, probably due to the fact that it feels pretty settled thanks to the fact that there will be 10 nominees this year instead of a fluctuating number. I personally feel like we’ve got nine nominees set in firmly drawn pencil: “Belfast,” “CODA,” “Don’t Look Up,” “Dune,” “King Richard,” “Licorice Pizza,” “The Power of the Dog,” “Tick, Tick… Boom!” and “West Side Story.” That would leave one spot for any number of fringe features, from SAG Awards favorite “House of Gucci” to box office juggernaut “Spider-Man: No Way Home” to critical darling “Drive My Car” to indie favorite “The Lost Daughter” to crafts contender “Nightmare Alley” to Amazon hit “Being the Ricardos.” Owing to my nature, I’ve had every single one of those predicted in my 10 for Best Picture at one point or another in the last six weeks. At the moment, the wheel has stopped on “House of Gucci,” which checks off a number of boxes, including but not limited to presumed support from the actors’ branch, the strength of Ridley Scott‘s acclaimed department heads, the fact that Sir Ridley directed two major adult dramas during a pandemic at age 83 (he turned 84 shortly after “House of Gucci” hit theaters), and ticket sales. As we’ve discussed, “House of Gucci” is one of the only adult dramas to have been a theatrical draw, something not even acclaimed films like “West Side Story” or “Licorice Pizza” can stake a claim to having done. All of that together makes me think “House of Gucci” is the obvious choice, except for one thing: it’s proved to be polarizing and it’s not even Sir Ridley’s best movie of 2021 (“The Last Duel” for life). Do you think “House of Gucci” is our elusive 10th nominee, or is it time to take out the trash and focus on another movie?

joyceeng: You know, I had my fun the past few weeks rotating “Spider-Man: No Way Home” and “House of Gucci” in and out of my lineup, but as I said on Wednesday, I’ve put my longstanding 10th film, “The Tragedy of Macbeth,” back in. It’s a stunning adaptation, has the glowing reviews and prestige factor (I’ve also been contemplating putting Joel Coen in director, but that’s typing for another day) and dropped on Apple TV+ at the perfect time that I can’t really see it missing in a field of 10, especially when some of its rivals for that spot have had a mixed-positive reception at best. But really, I’m just waiting for PGA to help us cull the field down some more. I can see “Gucci” both making PGA and not making it, same with “No Way Home,” the true box office behemoth. In that same vein, I can also see “Tick, Tick… Boom!” missing the Oscar field if these ostensible fringe contenders prove to be super strong. I still have it in for now because of the love for Andrew Garfield’s performance, but its nomination ceiling is lower than that of these other films. On Wednesday, I asked if “Being the Ricardos” was a sleeping giant and the very next day out comes the news that it had some boffo streaming numbers in its debut week on Amazon, per Nielsen’s metrics. So are we sleeping on it? How much will voters love Lucy?

Christopher Rosen: Maybe because I have a hard time finding Shakespeare, let’s just say, accessible, but I remain flummoxed by the appeal of “The Tragedy of Macbeth.” But maybe that’s my bias showing and nothing more. After all, the same argument for why I have “Tick, Tick… Boom!” in there (people love the Andrew Garfield performance!) could be applied to “Macbeth” (people love Denzel Washington). It seems likely that “The Tragedy of Macbeth” gets in multiple times at the Oscars — much like “The Ballad of Buster Scruggs” did for the Coens a few years back. Best Picture, Best Actor, Best Adapted Screenplay, Best Production Design, Best Cinematography? Why not? Have you just talked me into talking myself into “The Tragedy of Macbeth” getting nominations across the board? While I contemplate that, allow me to make the same case for “Being the Ricardos.” Truth be told, after I saw it back in November, I predicted it all over the place, including Best Picture. Then, bowing the social media backlash, I kind of moved off it save for Nicole Kidman in Best Actress. But now, like John Wick, I’m thinking I’m back. On paper, “Being the Ricardos” is a classic Best Picture nominee — a movie about Hollywood! — and Aaron Sorkin, as usual, stacked his below-the-line deck with a number of major players. Would it be surprising to see “Being the Ricardos” land two acting nominations, a screenplay nomination, and then perhaps an editing nomination (Alan Baumgarten was a nominee last year for “The Trial of the Chicago 7”) or a score nomination (our boy Daniel Pemberton) or a production design nomination (Emmy Award-winning “West Wing” production designer Jon Hutman), or maybe all three? Not really! And if the academy goes big for a movie about making art and artists who aren’t afraid to stand up to mob thinking (a subject, ahem, that seems like it might strike a chord for some in these days of c*ncel c*lture), wouldn’t it be a shoo-in for Best Picture too? I’m about ready to say yes — but if I move “Being the Ricardos” and “The Tragedy of Macbeth” in that means something has to come out. Is it “Tick, Tick… Boom!” or do you think one of those perceived locks is not really all that locked at all?

joyceeng: Look, we all saw what happened last year. The good news for this year’s slate is that it’s a solid 10 instead of the sliding scale. If you go by the current odds, I would say the top five are pretty safe, but any of the bottom five — “King Richard,” “CODA,” “Don’t Look Up,” “Tick, Tick… Boom!” and “The Tragedy of Macbeth” — getting shafted would not shock me. And looking at the BAFTA longlists, which is the most comprehensive industry data we have so far, “Gucci” and “Being the Ricardos” performed better there, with 13 and nine mentions, respectively, than these films did save for “Don’t Look Up,” which has 15 appearances. Obviously, some of these films are more tech-heavy than others, but the point is, most of them did not over-perform or were even snubbed in key categories, like “King Richard” being MIA in editing when the editing is one of the consensus best aspects of the movie. Combined with Aunjanue Ellis’ SAG Awards snub, is it closer to serving a double fault than an ace? I’m not going to predict that snub (yet?) — and it’d be sacrilegious right now with the Australian Open going on — but what if? And while we’re on the subject of BAFTA, our beloved “No Way Home” failed to submit in time to qualify for the transatlantic awards, and it also feels like that opening weekend afterglow hype of a Best Picture nomination has waned a bit. Do you still see a path for it to swing in with so many of these traditional contenders showing strength?

Christopher Rosen: Anything is possible, but I think the Spider-Men are maybe cooked. It doesn’t feel like pundits are taking it super seriously at this point and while it remains one of my 2021 favorites even I don’t think it has enough. But that could change next week with the PGA nominations, especially if it gets in over some of these other movies we expect. With great power comes great responsibility and all. Joyce, I’ll let you have the last word.

joyceeng: Well, if Andrew wins, we can pretend half of it was for Spidey. This is one of the last exciting corridors of the season before more guilds start weighing in and the field narrows and we’ll inevitably be beset with disappointment that our personal faves will probably not make it. So, I guess, enjoy the hopeful uncertainty of the next few days? And hope that next week’s nominees are not, unlike Paolo Gucci, a triumph of mediocrity.