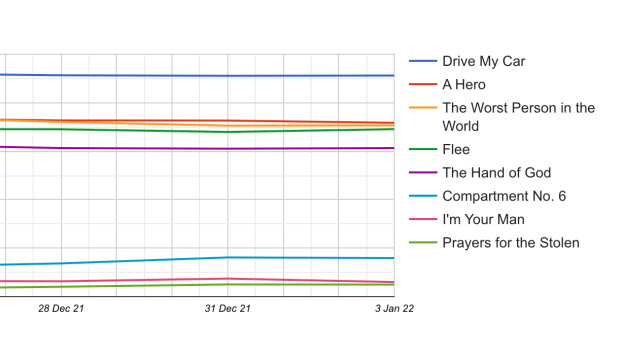 The Oscars announced their shortlists in 10 categories on December 21, including Best International Feature, and over a thousand users have already started placing their bets for which film will be selected as the best in world cinema. Their early forecasts give the strong advantage to Japan’s “Drive My Car,” which has been on an awards winning streak of late.

The three-hour film tells the story of a grieiving theater actor and director (Hidetoshi Nishijima), who is set to direct a production of “Uncle Vanya” and is assigned a young woman (Toko Miura) to be his chauffeur. The film has a 90 score on MetaCritic with film journalists calling it “profoundly beautiful,” “thoughtful and tearful,”  and “one of the great movies about the continuity of art and life.”

SEEOscar Experts predictions slugfest: Analyzing the shortlists and what they mean for Best Picture [WATCH]

The film started collecting prizes at the 2021 Cannes Film Festival, where it won Best Screenplay, the FIPRESCI Prize, and the Prize of the Ecumenical Jury. In late November it claimed Best International Feature at the Gotham Awards over other buzzed-about films including “The Worst Person in the World,” which also made the Oscars’ shortlist of 15 international titles. And not only has it won international film awards from regional critics in Chicago and Washington DC, it won Best Picture outright from the Boston Society of Film Critics, the New York Film Critics Circle and the Los Angeles Film Critics Association, a rare feat for a film not in the English language. Even “Parasite” didn’t sweep those awards.

As of this writing the film is predicted to win the Oscar by seven Expert journalists, and there will be many more chiming in in the coming days and weeks. It would be the 17th Japanese film to be nominated for Best International Feature and the fifth to win. That would break the nation’s tie with Spain and Denmark as the third most honored at the Oscars, and extend its record as the most awarded nation outside of Europe; Italy (14) and France (12) are far and away the academy’s most celebrated nations.

But don’t rule out Iran’s “A Hero,” whose director Asghar Farhadi has helmed two previous winners for Best International Feature in just the last decade, “A Separation” (2011) and “The Salesman” (2016). A number of users are also betting on “Worst Person” to win. The academy has a history of surprising us with its international category, so don’t take anything for granted just yet.