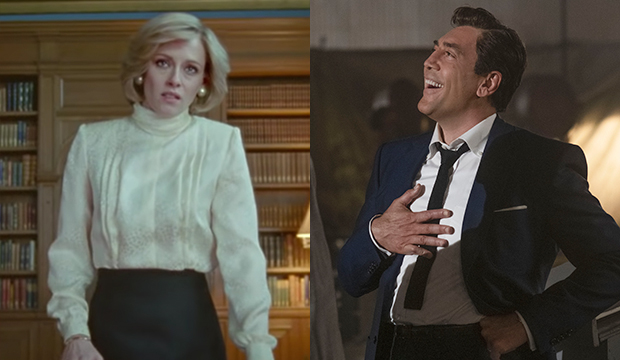 Welcome to Oscar Experts Typing, a weekly column in which Gold Derby editors and Experts Joyce Eng and Christopher Rosen discuss the Oscar race — via Slack, of course. This week, after a bevy of guild nominations, we wonder what that means for some top Oscar categories.

Christopher Rosen: Hello, Joyce! With our mouth-chatting complete for the week, let’s get to some serious typing about what Thursday’s wild and wooly guild awards nominations bonanza means for this year’s Oscars race. First, talk about timing: announcing the Producers Guild Awards nominees, Directors Guild Award nominees, Writers Guild Award nominees, and American Cinema Editors Eddie Award nominees within the same eight-hour period on the day Academy Awards voting started is the kind of synergy we love to see. Second, what did all these nominations teach us about the tea leaves? Well, I’d say not that much — unless you’re one of those pundits apparently surprised that “Dune” has dominated the industry awards nominees thus far. With 10 slots for Best Picture, we’ve kind of been set on nine likely nominees for weeks — and the guild nominations did little to disabuse me of those picks: “Belfast,” “CODA,” “Don’t Look Up,” “Dune,” “King Richard,” “Licorice Pizza,” “The Power of the Dog,” “Tick, Tick… Boom!,” and “West Side Story.” For that 10th spot, I could make the argument for any number of movies, including “Being the Ricardos” (a PGA nominee, and an over-performer at the Screen Actors Guild Awards where Javier Bardem landed a surprising Best Actor nomination), “House of Gucci” (which also over-performed at SAG and has as many guild mentions as presumed Best Picture lock “CODA”), “No Time to Die” (with eight guild nominations, it remains a favorite for the artisan community) or “Nightmare Alley” (seven guild nominations and a surprise Cate Blanchett nomination at the SAG Awards). At the moment, I’ve got “Ricardos” in at the Oscars, meaning I apparently believe that all 10 PGA Award nominees will port over at the Academy Awards. But does that really seem likely? Will one of these movies sneak in instead — or perhaps something artier like “The Lost Daughter” or “The Tragedy of Macbeth”? Please sort this out for me, and then let’s dive into whether the guild gauntlet will spell doom for Kristen Stewart‘s Best Actress aspirations — her delightful Variety Actors on Actors interview with fellow Best Actress contender Nicole Kidman notwithstanding.

joyceeng: The power of KStew’s dogs in that interview. G-Day (™ you) was truly wild, even if the capstone was anticlimactic with the consensus five directing hopefuls. While “Being the Ricardos” bombarded PGA, I’ve decided I’m not going to touch my Oscar lineup until after BAFTA nominations next week. That means I still have “The Tragedy of Macbeth” in my 10th slot. At the moment, I can’t see all 10 transferring over and “Macbeth” feels like the type of highbrow, artier fare that misses PGA, for whatever reason, but makes it in at the Oscars, like “Amour,” “Room” and “The Father.” Why at the expense of “Ricardos” though when the Aaron Sorkin flick can get a few above-the-line nominations? Mostly because I already have “Tick, Tick… Boom!” in. “Tick, Tick… Boom!” has also performed better at the guilds and has a more beloved central performance even though it might only hit two other categories besides Best Picture. But that is a lot more than you can say about “Spencer” right now. We knew it was polarizing, but the guilds’ abject rejection of it is a big fat YIKES. Not even costumes? “Jackie” was able to swing some guild noms, including Natalie Portman at SAG, and wound up with three Oscar bids. You’ve already dropped Stewart from your Best Actress lineup and I can’t say I’m not contemplating doing the same from mine, where I have her in fifth, after this week. But if not KStew, then who?

Christopher Rosen: I’m all over the map on Best Actress, but I’ve had a couple of consistencies among my projected nominees. The first is that Nicole Kidman is going to win her second Oscar and nothing that happened this week has moved me off that corner. The second is that Lady Gaga, Olivia Colman and Jessica Chastain are set as the other three nominees. That leaves one slot for a half-dozen worthy performers, many of whom I’ve had in these predictions at one point or another. But for now, I’ve come back around on Penelope Cruz. Passion is the point in her favor, and I do think that she could have a very loud contingent of voters putting her at the top of their ballots. Cruz also arguably has the more beloved movie as well: I’ve got “Parallel Mothers” getting nominations in original screenplay and score, and I can’t say the same for “Spencer” or “Respect” (which has kept Jennifer Hudson in this conversation for months). Cruz also feels like she’s got an inside track over presumed Best Picture stars Alana Haim and Rachel Zegler, both of whom could easily land in the race — but maybe won’t have enough support to supplant someone like Cruz. (That she and Javier Bardem could get household nominations this year is also a fun thing to hope for and predict.) So that’s where I’m at — Cruz over Stewart. What about you? I’m ready for an “I told you so,” of course…

joyceeng: Well, I won’t pull a Bobbi Adler just yet since we’re still awaiting the nominations, but I will say to let the record show that it was just a fortnight ago that you dismissed my Cruz suggestion, citing the lack of passion. How the turntables. It pained me to drop her recently, but now with a bit more distance from her BAFTA longlist snub and due to other circumstances, I think I will slot her back in as well. While the BAFTA miss remains bad, “Parallel Mothers” is a small, late-breaking film, and I do think there is passion for her performance. You know, maybe it’s actually Cruz — not Stewart — who’s the highbrow pick. She’s a former winner and three-time nominee, while Stewart is seeking her maiden nom with a weak, divisive film that has zero industry support. And, yes, I, too, would like to see Cruz at the Oscars as more than just Bardem’s plus-one. It’s crazy to think that Bardem ostensibly feels more secure for a nomination right now. Imagine telling someone that a month ago. I have him in my fifth spot in Best Actor, but I can’t shake the feeling that he’s still snubbable. Is this a turn that’s going to get a ton of No. 1 votes? I dunno. You’ve been on the Bardem bandwagon for months — how confident are you in “Cuban Pete”?

Christopher Rosen: I have to be honest: I’m very bullish on Javier and, at this point, kind of consider him a lock? If anyone is going to fall out in the transition from SAG Awards to Oscars in the Best Actor race, I can’t help but think it might be Denzel Washington. I know, I know — that’s probably absurd. But Bardem is just so winning in “Being the Ricardos,” and his campaign has been peerless. No offense to Washington, but Macbeth isn’t the… warmest role? I just keep going back to your screening of “Ricardos,” when a couple of industry folks were raving about Bardem blocks away from the theater. Dare I say, his performance has … legs. Okay, Joyce, let’s wrap here. Any last words this week?

joyceeng: It’s true, that couple could not stop gushing about Bardem. And I’m sure I would’ve heard the full five-star exaltation had we hopped on the same subway. I know you’re low on “Macbeth,” but I have to think Denzel’s safe for an acclaimed performance in an acclaimed film that might just win cinematography when we all remember that his last nomination was for “Roman J. Israel, Esq.” — a, uh, mixed film that approximately 12 people saw. He’s hit every precursor so far and might finally get his first ever BAFTA nomination next week if the jury selects him (I doubt he’s top two). Can’t wait to see what new chaos the Brits’ updated jury system brings.