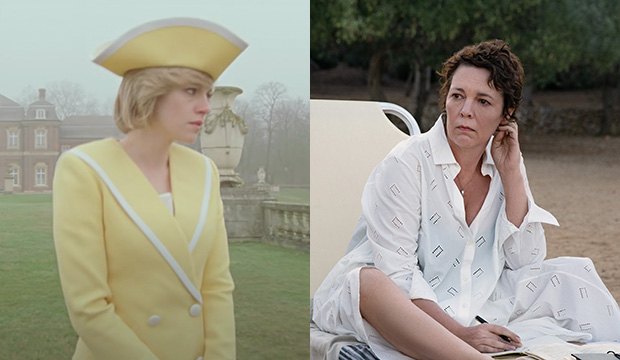 Welcome to Oscar Experts Typing, a weekly column in which Gold Derby editors and Experts Joyce Eng and Christopher Rosen discuss the Oscar race — via Slack, of course. This week, following the Netflix debut of “The Lost Daughter,” we revisit Best Actress.

Christopher Rosen: Hello, Joyce! We’re back to our regularly scheduled typing, following a week of chatting with our mouths and faces about “Spider-Man: No Way Home” and the Screen Actors Guild Awards. So what better way to ring in 2022 than with another pass through the Best Actress race? Not to pick favorites but to pick favorites: this has to be our favorite category, right? It’s definitely the most interesting — with numerous legitimate contenders and perhaps no true favorite. Okay, maybe that’s a bit of a stretch: The consensus is that Kristen Stewart is the pick to win here for “Spencer.” But as every day passes, I wonder if that will come to pass. You could argue that she’ll be the lone nominee from the film. The failure of “Spencer” to rate on the hair and makeup shortlist raised a red flag for me — signaling perhaps that Stewart will be more Glenn Close than Renee Zellweger in this year’s race. Or maybe that’s my bias showing: I’ve had Nicole Kidman at the top of the Best Actress heap for a while and remain solidly in her corner. It just feels like the kind of performance that will speak to voters — a mix of lower expectations because of the pre-release buzz, the risky nature of Kidman playing an icon like Lucille Ball, and the quality of her work. But I don’t think “Being the Ricardos” is going to be an Oscars juggernaut either — maybe a screenplay nomination for Aaron Sorkin and that’s it? Five of the last six Best Actress winners came from a Best Picture nominee — including last year’s champion, Frances McDormand. Using that logic, I’m starting to wonder if Rachel Zegler could emerge? This isn’t *just* because I spoke to her. If “West Side Story” ends up with double-digit nominations, she could be the strongest contender — unless she’s not even nominated, in which case *shrug emoji*. Help me, Joyce? What do you make of this category and who is going to win?

joyceeng: I’ll give you a pass on Rachel since you had her in before you talked to her, but we all know your M.O.! This category is wild this year because we could very well end up with five women who aren’t from Best Picture nominees. That hasn’t happened yet in this modern preferential era. For what it’s worth, the two years Best Picture was set at a solid 10, there were three Best Actress nominees from Best Picture nominees both times. And now we’re struggling to fit in one. Part of the issue is most of the strongest Best Picture contenders are — surprise, surprise — male-led. And top contenders like “West Side Story” and “Licorice Pizza” feature leading ladies making their film debuts. Zegler can get in, but I still have Alana Haim as my Best Picture representative here. Is there room for both? Maybe, but I’m not going to go there yet. I’ve been trying to figure out a way to get Penelope Cruz, whom I’ve had in and out, like, three times in the past six weeks, and Jessica Chastain, whom I dropped for Kidman in November, back in, and you know what? I’m gonna pull the trigger now. That means I’m gonna drop Lady Gaga and Kidman (Olivia Colman is my other pick), which breaks my heart because I really do want Nicole to get that egregiously overdue fifth nomination, but I feel like the passion for Chastain’s turn has not subsided while Kidman’s continues to have its detractors. And as we’ve discussed before, it seems like the “House of Gucci” buzz has died down a bit. Plus, much of Gaga’s candidacy was fueled by her NYFCC win and she has not won an award from a critics group since or even gotten a runner-up placement. Cruz is somewhat mirroring Anthony Hopkins’ trajectory last year. Not saying she’s gonna win, but just like “The Father” — also from Sony Pictures Classics — “Parallel Mothers” is a small late-breaker that was under-seen in the early goings. She won LAFCA and might add an NSFC win this weekend. All that said, I still have KStew at the top because she’s been the only constant in this chaos. Feel free to convince me to switch back in the Nic of time.

Christopher Rosen: Wow, this feels like a personal attack! But I don’t really know what I’d say to convince you about Kidman: “Being the Ricardos” didn’t really make a dent in this awards season — at least thus far. “Don’t Look Up” took all the streaming oxygen with its 250 gazillion hours streamed on Netflix over the holiday break, all while “Being the Ricardos” was over there on Amazon Prime Video just waiting to be watched. I guess I’d disagree that Kidman has a lot of detractors. I think the movie does, but almost everyone thought she was good, right? That’s my take for having her up top — with the added thought that “Spencer” is probably more polarizing than “Being the Ricardos.” (I’d love to know what that woman who sat behind me at Telluride and hated “Spencer” thought of “Being the Ricardos.”) But as we’ve been typing, I’ve kind of come to a perhaps ridiculous conclusion — one that ties the Best Picture conundrum into Best Actress. We’ve been talking about how there are probably eight Best Picture contenders set in, at the very least, strong modeling clay. Then perhaps two spots for a number of films, from “Spider-Man: No Way Home” to “Drive My Car.” One of the films I’d think we’d both agree is on that two-spot fringe is “The Lost Daughter.” Here’s my take: what if “The Lost Daughter” gets in as a Best Picture nominee and then Olivia Colman, whom we both expect to get nominated, kind of cruises to victory. It really does feel like she could’ve won another Oscar last year and we know counting her out at this point is foolish. Have I pretzeled logic’d myself into picking Colman? Maybe. Joyce, untangle this for me.

joyceeng: To be fair, was anyone expecting “Being the Ricardos” to do “Don’t Look Up”-esque numbers? I think most people think Kidman’s good (same), but there will always be that contingent that’s upset she doesn’t look like Lucy Ricardo — when she’s playing Lucille Ball. As for Colman, who’s excellent (as she always is) in “The Lost Daughter,” it does speak to her talent, rapid ascent and stature the past few years that so many of us haven’t really questioned a slot for her even when we’re not forecasting a Best Picture nomination for the film. While “The Lost Daughter” is not as divisive as “Don’t Look Up,” a quick Twitter search will show you that there are lots of folks who did not get the movie at all — some were expecting a thriller/mystery (honestly, give me that version too) — and cannot believe that it’s about a woman who stole a kid’s doll. I think the industry will appreciate the film more than the general public, but it feels like it’s still “bubbling under” in Best Picture — not to mention that, unfortunately, maternal ambivalence remains a prickly topic. That doesn’t mean Colman can’t win without a Best Picture bid — and pull a Glenda Jackson: win two Best Actress Oscars three years apart with another Oscar nomination and an Emmy victory for playing a Queen Elizabeth in between — but I feel like this will just be one more nomination for her ledger. So does that leave us back at Stewart? Is she just going to cruise through the televised awards like she’s been doing through the regionals? Before you answer that, should we also look further down the line at underdogs for a surprise nomination, like Tessa Thompson, Emilia Jones, Renate Reinsve, Jodie Comer and Jennifer Lawrence?

Christopher Rosen: Let me start with your end question: I would love to find a spot for all of those performers. But if I had to throw a Hail Mary prediction on one, it would be Emilia Jones. I still believe in “CODA” and I think that movie could surprise at the Screen Actors Guild Awards with an ensemble showing along with Troy Kotsur. But what if Jones gets in there too? That will open the door for her to take a spot in the Best Actress five. Wouldn’t it be funny if Jones is the actress from a Best Picture nominee, and not Zegler or Haim? As for Stewart, I suspect you might be right — she kind of defaults as the favorite because she has the least slings against her at the moment. If she were to win, who could really complain? Her performance rules. But I still think this one is going to someone else. Last words, Joyce, before we head off?

joyceeng: We touched on Jones getting in at SAG last night and I can see it happening even if it doesn’t translate to the Oscars. She’s been kinda overlooked since Marlee Matlin, understandably, had the early hype and predictions while Kotsur’s been the surprising but consistent entrant in the jumbled supporting actor race recently. Stewart also greatly benefits from a lack of a strong alternative and she can win without sweeping the precursors. We’ve talked about how SAG is where she’s most vulnerable — yes, I’m still predicting Gaga and Kidman to get in at SAG — and I can see that going to someone else. The next time we type, we’ll have SAG Awards nominations and the BAFTA longlists, so our allegiances will likely shift again. What a time to be alive.