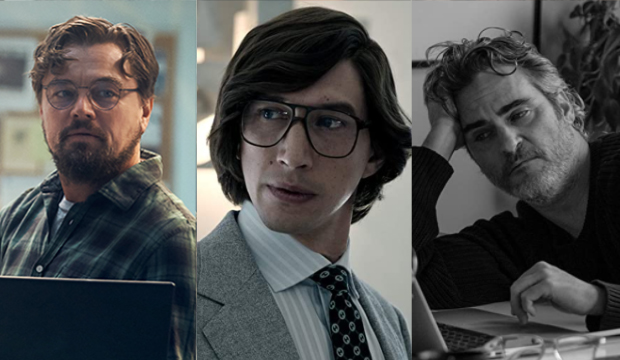 In 2020, Joaquin Phoenix (“Joker”) won Best Actor from a lineup of five contenders in which he ranked in the middle, age-wise. At 45, he defeated two older competitors [Jonathan Pryce (72, “The Two Popes”) and Antonio Banderas (59, “Pain and Glory”)]  and two younger ones [Adam Driver (36, “Marriage Story”) and Leonardo DiCaprio (45, “Once Upon a Time in Hollywood”)]. Two years later, Phoenix could face off once again against those two junior contenders.

Of these three, DiCaprio stands the best chance of making it into the upcoming lead male lineup, as he currently ranks seventh by our odds. He is looking to earn his seventh acting nomination for “Don’t Look Up.” In this deft satie his character, Dr. Randall Mindy, attempts to use his influence as an astronomer to alert mankind about a comet’s impending collision with Earth. Prior to his 2020 bid, DiCaprio competed as the star of “The Aviator” (2005), “Blood Diamond” (2007), and “The Wolf of Wall Street” (2014) before prevailing for “The Revenant” in 2016. His first career nomination came in 1994 for his supporting turn in “What’s Eating Gilbert Grape.”

Running in 14th place is Driver, whose first shot at Oscar gold came just three years ago for his featured role in “BlacKkKlansman.” While his portrayal of ill-fated businessman Maurizio Gucci in “House of Gucci” gives him his best shot at a nomination, it is only part of his eclectic 2021 body of work. As the star of the musical “Annette” and the medieval drama “The Last Duel,” he also respectively takes up the 20th and 34th slots in our ranking. If he succeeds in securing a spot in the final five, he will be the 25th man to receive three acting nominations before the age of 40. The most recent entrants on that list were DiCaprio in 2007 and Phoenix in 2013.