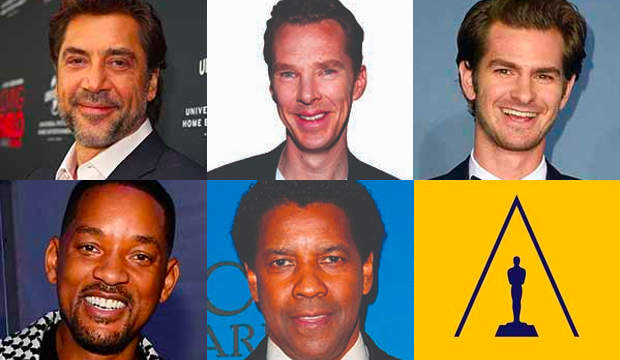 All five of these men have contended here at least once before, making theirs the first Best Actor lineup since 1981 to include no first-time acting nominees. Furthermore, it is the very first to consist only of previous lead nominees. The last time this came close to happening was in 2003, when newcomer and eventual victor Adrien Brody (“The Pianist”) competed against category veterans Nicolas Cage (“Adaptation”), Michael Caine (“The Quiet American”), Daniel Day-Lewis (“Gangs of New York”), and Jack Nicholson (“About Schmidt”).

Bardem is also a past winner for his supporting role in “No Country for Old Men” (2008). He has already vied for this prize twice as the star of “Before Night Falls” (2001) and “Biutiful” (2011). Cumberbatch and Garfield have each been nominated here once for “The Imitation Game” (2015) and “Hacksaw Ridge” (2017), respectively.

Smith has two previous lead bids to his name for “Ali” (2002) and “The Pursuit of Happyness” (2007). He and Washington made history 20 years ago as the first pair of Black actors to face off in this category, and their current rematch constitutes the fifth such instance. The middle three involved Don Cheadle (“Hotel Rwanda”) and Jamie Foxx (“Ray”) in 2005, Smith and Forest Whitaker (“The Last King of Scotland”) in 2007, and Daniel Kaluuya (“Get Out”) and Washington in 2018. With an additional Best Picture bid for “King Richard,” Smith follows Washington (“Fences”) as the second Black person to score concurrent producing and acting nominations.

This year’s lead male nominees have an average age of 51, which is the eighth highest in the history of the category. The record is held by the 1982 group, whose ages ranged from 44 to 76 and averaged out to 58. The eldest competitor, Henry Fonda (“On Golden Pond”), emerged victorious that year and held the title of oldest Best Actor champion until Anthony Hopkins (83, “The Father”) supplanted him just last year. At 67, Washington is the 16th oldest man to ever compete for this award and would be the third oldest to win it.