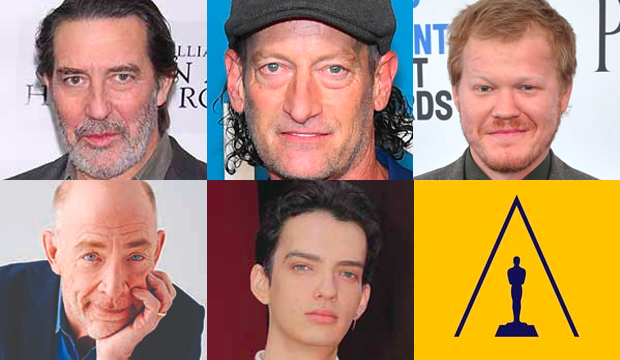 After standing for 32 years, Timothy Hutton’s Oscars record for longest Best Supporting Actor-winning performance (“Ordinary People,” one hour, five minutes, and four seconds) was broken twice within the last decade. Christoph Waltz, whose turn in “Django Unchained” is 73 seconds longer than Hutton’s, took the title in 2013. He was then usurped in 2019 by Mahershala Ali (“Green Book”), who set the bar 21 seconds higher. Although these recent wins demonstrate the academy’s preference for longer supporting male roles, the tide has been steadily shifting since Ali’s victory.

Brad Pitt won this award in 2020 for his 55 minutes and 12 seconds of work in “Once Upon a Time in Hollywood.” He was followed last year by Daniel Kaluuya, whose screen time total in “Judas and the Black Messiah” comes to 46 minutes and nine seconds. This average annual decrease of over 10 minutes is guaranteed to continue into its third year, since each of the current supporting male contenders appears on screen for less than 37 minutes.

Leading the 2022 pack in terms of screen time is Kodi Smit-McPhee, who appears in 36 minutes and two seconds (or 28.00%) of “The Power of the Dog.” His ranks within the top third of longest performances ever nominated for the award and would be the 36th lengthiest to win it. It is also the shortest one to be the longest in a Best Supporting Actor lineup since Jonah Hill’s in “Moneyball” (2012).

Close behind is Troy Kotsur, who has 35 minutes and 34 seconds of screen time in “CODA.” His percentage of 31.31 makes his the longest nominated supporting performance of the year in that regard and one of the ninth largest recognized in this category over the past five years. Included among those who rank ahead of him are all of the last four winners, whose percentages range from 33 to 52.

In the middle of the lineup is Smit-McPhee’s “Power of the Dog” castmate, Jesse Plemons, whose screen time adds up to 33 minutes and 46 seconds, or 26.24% of the film. They are the 21st set of actors from the same film who have faced off here. Just seven of these situations have resulted in one of the men winning, and the one with more screen time has had the advantage all but two times. That pair of special cases involved Ben Johnson winning for “The Last Picture Show” (1972) over Jeff Bridges and Kaluuya prevailing last year over his costar, LaKeith Stanfield.

Next is J. K. Simmons, who appears in 17 minutes and four seconds (or 12.92%) of “Being the Ricardos.” He is the only previous nominee in the bunch, having triumphed on his first outing for his featured turn in “Whiplash” (2015). His 41-minute, nine-second winning performance is the 21st longest to ever take this prize, but his “Being the Ricardos” one would be the 10th shortest.