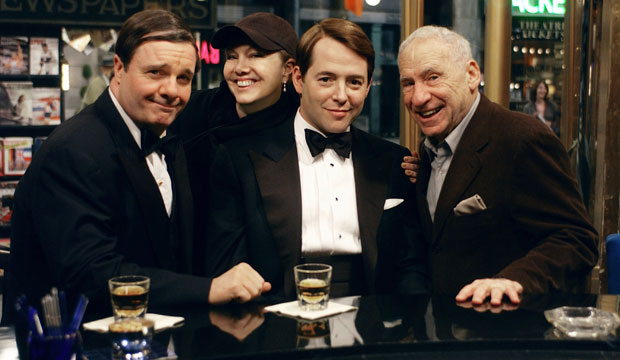 This year’s Oscars telecast incorporated reunions of cast members from classic movies such as “The Godfather,” “Pulp Fiction,” and “Juno.” Last year’s Tony Awards actually did something similar, bringing together cast members from different Broadway classics such as “Hairspray,” “Ragtime,” “Rent,” and “Wicked” for performances as the industry was fighting to recover from the COVID-19 pandemic. Since the Tonys will be presenting their landmark 75th annual ceremony this year, I think it would be even more fitting if they reunite more co-stars from Broadway classics of yesteryear to perform or even present awards. Here are some suggestions. Vote in our poll at the bottom of this post to let us know which you’d most like to see.

In 1979 Stephen Sondheim and Hugh Wheeler‘s adaptation of Christopher Bond‘s 1973 stage play won eight Tony Awards including Best Musical. Sondheim died of cardiovascular disease last November at the age of 91, so the legendary composer/lyricist is sure to be featured prominently during this year’s In Memoriam segment, or perhaps given a full-fledged tribute. If they were to do that, I’d love to see both of the Tony-winning stars of the original Broadway production of “Sweeney Todd.” They could even have fellow original cast member, Victor Garber, join them.

Michael Crawford and Sarah Brightman – “The Phantom of the Opera”

In 1988 Andrew Lloyd Webber‘s stage adaptation of Gaston Leroux‘s 1909 novel won seven Tony Awards including Best Musical. The longest-running show in Broadway history will be celebrating its 35th anniversary on the Great White Way next January. I think it would be epic to have the original Tony-winning Phantom reunite with his original “Angel of Music.” They could even have Lloyd Webber himself join them.

In 1982 Henry Krieger and Tom Eyen‘s show inspired by R&B acts such as The Supremes, The Shirelles, James Brown, and Jackie Wilson won six Tony Awards (including Best Actress in a Musical for Holliday). Last December marked the 40th anniversary of the original 1981 Broadway production’s opening. Jennifer Holliday got to perform the show’s signature song, “And I’m Telling You I’m Not Going,” during last year’s ceremony, but I think it would be quite a moment to see her reunite with her fellow original Dreams during this year’s telecast.

In 2001 Mel Brooks‘s stage adaptation of his 1968 Academy Award-winning film set a new record as the most awarded production in the history of the American Theatre Wing as it won 12 Tony Awards including Best Musical. The dynamic duo of Lane and Broderick have worked together on different projects over the years, but “The Producers” is their best known collaboration. Having them appear together sounds absolutely ideal. Perhaps Brooks could join them too.

Mandy Patinkin and Bernadette Peters – “Sunday in the Park with George”

In 1984 Sondheim and James Lapine‘s show inspired by French artist Georges Seurat‘s painting, “A Sunday Afternoon on the Island of La Grande Jatte,” earned 10 Tony Award nominations including Best Musical. The following year, it won the Pulitzer Prize for Drama.

If this year’s telecast does do a full-fledged tribute to Sondheim, I think both stars of the original production of “Sunday in the Park with George” should also participate. In fact, Patinkin has actually reunited with one of his former Broadway co-stars on the Tonys stage once before: during the 2012 ceremony he presented Best Revival of a Musical with Patti LuPone, a fellow Tony winner for the 1979 original Broadway production of “Evita.”

In 1961 Michael Stewart, Charles Strouse, and Lee Adams‘s show influenced by Elvis Presley‘s conscription into the army won four Tony Awards including Best Musical. Its Tony-winning leading man remains an icon of pop culture, while the leading lady is a bona fide Broadway legend. It would be an epic moment to witness them appear together during the Tonys.

In 1987 Alain Boublil and Claude-Michel Schönberg‘s stage adaptation of Victor Hugo‘s 1862 novel won eight Tony Awards including Best Musical. Last March marked the 35th anniversary of the original Broadway production’s opening. I think this year in particular would be a good time to include a reunion of original cast members, especially Tony nominee Wilkinson and Tony winner Ruffelle as they both originated their respective roles of Jean Valjean and Éponine not only in New York, but also in London, which is where “Les Misérables” has become the longest-running musical in the world.

In 2003 Thomas Meehan, Mark O’Donnell, Marc Shaiman, and Scott Wittman‘s stage adaptation of the 1988 John Waters film won eight Tony Awards including Best Musical. One of the performances from last year’s Tonys actually included original cast members Winokur, Matthew Morrison, and Kerry Butler performing the show’s finale, “You Can’t Stop the Beat.” However, I’d love to see the original Tony-winning star, Winokur, also reunite with her Tony-winning mama, Fierstein, during the telecast. This year in particular would be an appropriate time to do so since “Hairspray” will be celebrating the 20th anniversary of its Broadway opening this August.

Who are some other former co-stars you’d love to see reunite at the Tonys? Vote in the poll below or comment with your own ideas.